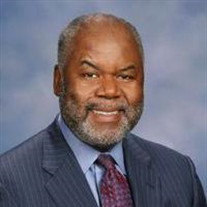 STANLEY, Mr. Woodrow - Age 71, passed away Wednesday, February 16, 2022 at Hurley Medical Center. Family Hour 10:00 AM Wednesday, February 23, 2022 at Grace Emmanuel Baptist Church, 3502 Lapeer Rd., with funeral service commencing at 11:00 AM, Rev. Dr. Rabon Turner, Host Pastor, Pastor Douglas Banks, Officiating. Interment Sunset Hills Cemetery, G-4413 Flushing Rd. Friends and pallbearers will assemble at the Church, 10:00 AM Wednesday. Mr. Stanley will lie in state in the Chapel of Lawrence E. Moon Funeral Home, 906 W Flint Park Blvd., and may be viewed Tuesday from 1:00 PM-7:00 PM with family present to receive friends. Woodrow Stanley -  a Champion of the City of Flint,  a titan in his community,  a mentor,  a pillar,  a true public servant,  husband,  father,  grandfather,  friend,  a warrior for all he loved,  an inspiration to so very many   - has gone on to collect his much-deserved heavenly reward for being a good and faithful servant. Woodrow Stanley, former Flint Mayor, who also served as a city councilperson, state representative, chairman of the Genesee County Board of Commissioners, and president of the Michigan Municipal League went from labor to reward Wednesday, February 16, 2022 at age 71. Woodrow Stanley was first elected mayor in 1991, after serving as a city councilperson for eight years. During his 11 years as Mayor, he led delegations to Washington, DC to meet with US Presidents, pushing for his transitioning industrial city to become a national urban development laboratory with incentives to lead other such cities into new growth. He built bridges both inside and outside Flint, elevating a sense of pride among the citizens as he invited national leaders to become a part of Flint’s reinvigorated purpose. It became commonplace to see leaders like Bill Clinton, Jesse Jackson and Al Sharpton at meetings that inspired hope. He led Flint residents into the promise of better days ahead. Adopting the motto, “Flint Pride, Keep It Alive,” he restored and initiated community events and engagement, including the Fourth of July fireworks festival, Student of the Month, Mayor’s Youth Cabinet, and the development of University Park. In 1993, he founded the Woodrow Stanley Youth Foundation which continues to provide grants and scholarships to Flint youth and youth-serving organizations. The shrinking tax base, fueled by a sharp decline in population, impacted not only the city’s operating budget, but also led to a recall of Mayor Stanley in 2002, a blame much of the city felt was unfair and misguided. Undeterred, Woodrow Stanley kept fighting for Flint as chair of the Genesee County Board of Commissioners and in 2008, a member of the State House of Representatives. Woodrow was a renaissance man; he loved sports, music, theatre, a good book, his Sunday NY Times, golfing, tennis, storytelling, gardening, and a delectable culinary experience. Woodrow Stanley was born in Schlater, Mississippi to Sammie and Bessie Mae Stanley, Woodrow was one of 12 children. In 1959, his family moved to Flint; he grew up in the St. John Street neighborhood. He was a proud graduate of Flint Northern High School, Mott Community College, and the University of Michigan-Flint. He met his college sweetheart, Reta Venessa James, in 1972. They married in 1974. Together, they had two daughters: Heather Venessa and Jasmine Woodrina. Woodrow was an active member of Vernon Chapel A.M.E. Church, serving as Steward Pro Tem. Other memberships include National League of Cities, Michigan Democratic Party, Michigan Municipal League where he also served as President, Eureka Lodge #16 P.H.A., Saginaw Valley Consistory #71 Grand Inspector General, and NAACP (Lifetime Member). Woodrow is survived by his loving and devoted wife of 47 years, Reta; daughters: Chennelle Dismond, Heather Stanley, and Jasmine (John) McKenney; 7 grandchildren: Sydney, Kaila, Carmia, John III, Sasha, Rachel, and Karson; 2 brothers: Thomas (Tracie) Stanley and Marcus Stanley; 6 sisters: Normadeen Thompson, Rosa Hyatt, Genevia Stanley, Bobbie Stanley, Patricia Stanley, and Alice Faye Stanley; 2 sisters-in-law: Jacqueline (Michael) Lewis and Cheryl Golidy; 2 brothers-in-law: Robert (Pamela) James, Jr., and Rev. Earl Fisher; lifelong friend and brother: Charles (Shirley Louise) Winfrey, and a host of loving nieces and nephews. He was preceded in death by his parents: Sammie and Bessie Mae Stanley, 2 brothers: Edward Stanley, Sr. and Jimmy Stanley, and sister, Lucinda Fisher.   It has been said by many that Woodrow Stanley is Flint’s Forever Mayor. He helped us believe in ourselves, to believe in Flint, to believe in one another. He was our advocate at a time when we desperately needed one. Rest In Peace, Woodrow. Thank you for a life well lived.  In lieu of flowers, please make donations to the Woodrow Stanley Youth Foundation, 2211 Brownell Blvd., Flint, MI 48504-7185. Live Stream will be held the day of service: graceemmanuelbaptistchurch.org or Livestream by phone at: 1-844-749-3015.

The family of Mr. Woodrow Stanley created this Life Tributes page to make it easy to share your memories.

Send flowers to the Stanley family.