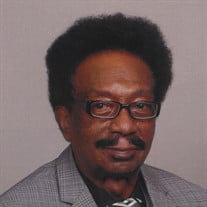 HAYNESWORTH, Mr. Woodrow - Age 76, passed away Monday, April 4, 2022 at his residence. Family hour 11:00 AM Monday, April 11, 2022 at House of Prayer Baptist Church, 1851 W. Carpenter Rd., with funeral service commencing at 12:00 PM. Pastor Rodrick Lagardy, officiating. Interment Gracelawn Community Cemetery, 5710 N. Saginaw St. Friends and pallbearers will assemble at the church 11:00 AM Monday. Mr. Haynesworth will lie in state in the Chapel of Lawrence E. Moon Funeral Home, 906 W. Flint Park Blvd., and may be viewed from 10:00 AM - 4:00 PM Sunday. Mr. Woodrow Haynesworth was born June 5, 1945 in Uniontown, Alabama, the son of Andrew Haynesworth and Lucretia Walters. Woodrow confessed Christ in his life at an early age. He was educated in the Birmingham Public School System and graduated from Parker High School, in May of 1963. Upon graduation he soon joined north and settled in Flint, Michigan, and while there he attended Mott Community College. He was drafted into the US Army and served in the Vietnam War. Shortly after attending college, Woodrow soon aspired to be in the workforce and sought employment with W.H. Transportation, where he would remain for over forty years and later retired from. Woodrow enjoyed his family, especially those grandkids! He watched grow up so fast. He enjoyed traveling with his family out of town. He had a great love for computers, drawing, bowling and listening to music. Most of all Woodrow loved the Lord and serving in his house of prayer as a Usher for fifteen years. He was a true lover of people and will be missed by all that knew him and loved him. Mr. Haynesworth leaves to cherish his memory: children, LaJayia (Joseph) Boothe, William Von (Cecilly) Johnson, Uelisa (Constantine) Bryant and Erica Cross; grandchildren, Victoria Cox, Alexis Johnson, Jasmine Johnson, Cashyra Stewart, Camarius Stewart, Chelbi Frazier, Julius Bryant, Myata Bryant, Constance, Richard, Eric, Mahonis and Markeeas; great grandchildren, McKenzie Green, Cannon Walker of Mesa, AZ and Camarius Stewart Jr. of Oacala, FL; three sisters, Rebecca Taylor, Shirley Elliott, Lula Bell (Willie) Boyd; four brothers, Andrew (Shirley) Haynesworth, Ira James Walters, Londale Haynesworth and Ronnie Haynesworth; and a host of nieces and nephews including special nieces, Felicia Haynesworth and GyJuana “Lady” McCrary; and a host of other relatives and friends including special friends, Bobbie Coleman, Robert Coleman, James Presnail and Al Strong. Mr. Haynesworth was preceded in death by his parents, Lucretia Walker and Andrew Haynesworth; Stepfather, Mann Walters; sister, Rebecca Taylor; aunt, Hattie Clancy. The family would like to express special thanks to Dr. Sunita Tummala and the VA Medicial Center.

The family of Mr. Woodrow Haynesworth created this Life Tributes page to make it easy to share your memories.

Send flowers to the Haynesworth family.