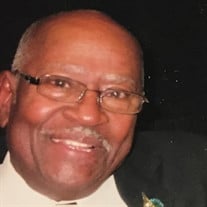 WILSON, Deacon Willie Eugen - Age 90, passed away Monday, October 18, 2021 at Wellbridge of Grand Blanc, MI. Family hour 10:00 AM Saturday, October 30, 2021 at Mt. Calvary Baptist Church, 4805 N. Saginaw St., funeral service commencing at 11:00 AM. Rev. Dr. Henry Fuller, officiating. Interment Flint Memorial Park, G-9506 N. Dort Hwy. Mt. Morris, MI. Friends and pallbearers will assemble at the church 10:00 AM Saturday. Deacon Wilson will lie in state in the Chapel of Lawrence E. Moon Funeral Home, 906 W. Flint Park Blvd., and may be viewed from 12:00 PM-6:00 PM Friday, with family present to receive friends from 4:00 PM-6:00 PM. Deacon Willie Eugen Wilson was born January 27, 1931, in Humphreys County, Mississippi, the twelfth child born to Isaiah and Ida (Golden) Wilson. As a young man, he worked on the family farm and attended Simmons High School. In 1951 he was drafted into the U.S. Army, and during the Korean War he served as a communications specialist, demolition specialist and foreign observer until he was honorably discharged in 1953. After returning home he married the love of his life, Loma (Snyder) and their union was blessed with three children: Cornelius, Lona and Gwendolyn. In 1953, he began working as a nurse’s assistant at Fort Custer Army Hospital in Battle Creek, MI. Then in 1956 the family moved to Chicago, IL where he worked as a laboratory technician in animal research and as a surgical recovery aid at Hines Veterans Hospital. During this time, he completed high school at Windell Phillips High School and subsequently graduated with honors from Crane Junior College in 1962, majoring in chemistry. He moved to Flint, MI in 1966 and soon after began working for General Motors. In 1997 he retired from Buick after 31 years of service. Deacon Wilson received Christ as his personal Savior in 1943 at Mt. Gideon Baptist Church in Hollandale, MS. In 1967, he became a member of the Mt. Calvary Missionary Baptist Church, under the leadership of Pastor Dr. Granville Smith. He was appointed to the Deacon Ministry and was a faithful part of many other ministries including Men’s Day, Sunday School, Male Chorus, Transportation, Culinary and Nurses Guilds. He was always a faithful steward, who strove to be proficient in the Word of God, to win souls to Christ and to fulfill the purpose and the call God placed on his life. His favorite biblical passages were Psalms 23, Psalms 24, and Ecclesiastes Chapter 12. Deacon Wilson loved spending time with his family, playing dominoes, bowling, and traveling; most recently traveling to New Mexico to visit his granddaughter. He was passionate about education and instilled the importance of education in his children and grandchildren. He was also a 33rd Degree Mason, and a Shriner, being very active in both organizations. Deacon Willie Eugen Wilson is survived by: his wife of 68 years, Mrs. Loma (Snyder) Wilson; his children, Mr. Cornelius Wilson of Burton, MI, and Ms. Gwendolyn Wilson of Grand Blanc, MI; grandchildren, Ms. Kesha Harris of Flint, MI, Dr. Tanya Wilson of Indianapolis, IN, Mr. Jerome Ohlrogge of Bremen, Germany, Ms. Rachael Wilson of Las Cruces, NM, and Mr. Scott Ohlrogge of Bremen, Germany; great-grandchildren, Ms. Kadijah Gordon of Flint, MI, Mr. Donta Gordon of Mt. Clemons, MI and Ms. Jayla Harris of Concord, N.C.; two great-great-grandchildren, Mekhi Whitfield and Lauren Gordon, both of Flint, MI; as well as a host of nieces, nephews, and friends. Deacon Wilson was preceded in death by his daughter, Lona Wilson; parents, Isaiah and Ida Wilson; twelve siblings. The family would like to extend special thanks to Pastor Henry Fuller, the Mt. Calvary Church family, and Wellbridge Compassionate Care.

The family of Deacon Willie Eugen Wilson created this Life Tributes page to make it easy to share your memories.

Send flowers to the Wilson family.