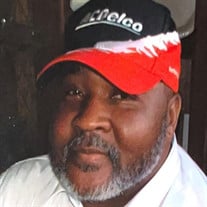 WILKES, Mr. Willie B. Sr. - Age 78, passed away Saturday, January 29, 2022, at Ascension Genesys Hospital in Grand Blanc, MI. Family hour 10:30 AM Saturday, February 5, 2022, at New Heaven Missionary Baptist Church, 3184 W. Pierson Rd., with funeral service commencing at 11:00 AM. Interment Sunset Hills Cemetery, G-4413 Flushing Rd. Friends and pallbearers will assemble at the church 10:30 AM Saturday. Mr. Wilkes will lie in state in the Chapel of Lawrence E. Moon Funeral Home, 906 W. Flint Park Blvd., and may be viewed from 12:00 PM - 6:00 PM Friday.Willie B. Wilkes Sr. was born on Langsfield Plantation in Tchula, MS to the late Sam and Mildred Wilkes. He was proceeded in death by his brothers John Lee Wilkes, James Wilkes, Lenord Wilkes, Alvin Wilkes, nephew Christopher Tidwell, and niece Latoyan Wilkes. Willie B. began working in the cotton fields beside his mother at the age of 6. His mother implemented two principles in him: faith and hard work. Willie B would carry these principles in everything he did. As a teenager, he did different task in the cotton field from planting, chopping, picking, and driving tractors. Willie B. attended Tchula Attendance Center (TAC) when cotton wasn’t in season and the weather wouldn’t allow him to work. At 18, he began driving the bus for TAC and would graduate from TAC in 1965. After graduating, he moved to Flint, Michigan where he lived with his favorite Aunt Cleo. He began working for GM (Fisher Body) until he was drafted in 1970. In the Army, he served at Fort McClellan until he deployed to Vietnam. In Vietnam, he would serve as a light wheel mechanic. He would receive many accolades and sometime special treatment because of his skill set. After he returned from Vietnam, he would continue to work for General Motors (Buick) for over 40 years.Willie B.’s hobbies included running and working on cars or anything mechanical. It was a daily routine of his to run 3 to 10 miles in any kind of weather. He would then come in and work in the garage until it was time to get ready for work. He would then work 8 hours plus at GM. Some nights, he would get off work with GM and go back to work in the garage. Willie B. loved traveling and road trips. He would get off work and pick up his grandfather James Montgomery (Bozo), and they would head to Mississippi for the weekend to visit family and friends. No matter if he was traveling alone or leading a convoy of cars he was going to be late. Willie B. was a faithful Soldier on the Christian Battlefield. He began serving the Lord and was baptized at an early age. As a child and young adult, he was a member of MT Sinai AME Church in Tchula, MS where he served as the Superintendent of Sunday School. When he moved to Flint MI, he joined Pentecostal Spiritual Church Flint, MI. While at Pentecostal Spiritual, he served as Superintendent of Sunday School. He would later join New Heaven MBC, where he would serve for over 40 years as Deacon, Trustee, and Treasurer. Willie B. Wilkes Sr. leaves a life full of memories to be cherished by: his loving wife for over 48 years Lillie M. Wilkes; daughter, Shirley Butts (Charles); sons, Willie B. Wilkes II (Tanisha), Frederick D. Wilkes (Sonya), and Kevin L. Wilkes (LaKevia); brother, George P. Wilkes (Gwen); sisters, Odessa Robinson, Diane Wilkes, Christine Hobson (Hosea), and Bobbie Jean Washington (Jimmy); 11 grandchildren; 6 great-grandchildren, a host of nieces, nephews, cousins, and friends that will be forever affected by his life. Servies will be lived streamed at: https://youtu.be/EGctPhfkGdI

The family of Mr. Willie B. Wilkes Sr. created this Life Tributes page to make it easy to share your memories.