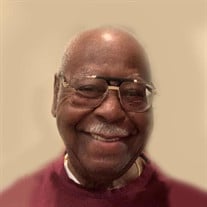 Willie Eldrage Artis passed away on Thursday, June 2, 2022. Holding hands with his beloved Veronica, upright in bed in fresh pajamas and bedclothes, he died at peace and at home. Born in Memphis, Tennessee on May 30, 1934, in the midst of the Jim Crow South, Willie’s intelligence, persistence, and determination drove him to create an industry-leading packaging company in his adopted hometown of Flint, MI. Willie’s life’s work, Genesee Packaging Company, was a significant minority-owned corporation that did business with General Motors. From its inception in 1979, Mr. Artis steered his company through the ups and downs associated with the American auto industry to the point where he was consulted by governors, members of congress and presidents. Perhaps the story of Willie’s life is best understood with a quote from his autobiography From Jim Crow to CEO; the Willie E. Artis Story: “How does a poor Black kid from Memphis living under Jim Crow do something extraordinary with his life?” It started with that poor Black kid’s parents: Violet and James. From them, Willie learned that hard work could make a difference; that one could, even in the worst of racist times, stand up for one’s rights, and that integrity was the cornerstone of success. Willie put those childhood lessons to work throughout his life. At an early age, Willie Artis went to work. He mowed lawns. He did grocery deliveries. He managed a small market. He was a butcher’s assistant and, then, a butcher himself. Even before he reached junior high school, he had a burning desire to work, learn, and succeed. Mr. Artis graduated from St. Anthony’s Catholic High School in Memphis in 1952. Willie followed his brother Boots to Chicago, where he attended Wilson College in 1953-54. At 20 years old, he found himself on the floor of Triangle Container Corrugated Company as he learned the corrugated and packaging businesses from the ground up. In 1964,Willie moved to Flint and found himself as an employee of Flint Boxmakers. In 1966, age 32, Willie was promoted to manufacturing manager. In the late 1970s, General Motors instituted minority business programs. In 1979, Mr. Artis and a Native American colleague recognized that they were experts in the corrugated and packaging business, and they qualified for those programs under the new GM guidelines. Genesee Packaging was born. Willie met his future wife Veronica when they attended minority business summer sessions at Dartmouth College in the summer of 1985. And they were married on November 25th, 1987. Willie soon began to give back to the Flint area community. Willie was a member of the Michigan Minority Business Development Council, Genesys Health Systems, Warwick Hills Country Club, the Flint Public Library, and the Flint Business and Development Council. Mr. Artis was tapped and recognized by a variety of governmental agencies. He served on Governor James Blanchard’s Entrepreneurial Business Commission from January 1989 to June 1990. He also received special recognition from Governor Jennifer Granholm on October 13, 2005. He was awarded the Flint Jewish Federation’s Don Riegle Community Service Award. In 2001, he was inducted into the Junior Achievement Business Hall of Fame. Mr. Artis has also been recognized by President Clinton, the U.S. Senate, the Michigan House of Representatives, the State of Michigan, and the City of Flint for his work in minority affairs and his business success. Mr. and Mrs. Artis were frequent guests at the Obama White House for dinners, celebrations, and the famed White House Christmas party. He was preceded in death by his parents Violet and James, and his siblings Louvenia, Howard, and Robert (Boots.) He is survived by his lovely wife Veronica, and his children: son William Gerard and his wife Clara Renee Artis, his daughter Rhonda and her husband Erskine Roberts, and his daughter Rosalind Jimason. Willie was devoted to his granddaughters: Brittany, Faith, Charity, and Mayah. Willie is also survived by his sister, Jessie Wooten, age 91. The family would like to recognize Willie’s favorite nephew, Johnny Russell and his wife Joyce. In addition, the family wants to recognize several special friends: Larry and Jane Worthing, and Terence Broussard. To know Willie Artis was to know a man that was the last of his kind. He was kind, yet fierce. He could scare the beejezus out of an employee, and he could be the most compassionate of souls. Willie will be cremated. A small memorial service for family and special friends will be held later this month. Willie has requested that his memory be honored with donations to his two favorite charities: The Veronica and Willie Artis Scholarship Endowment at Flint’s Mott Community College or the Flint Public Library.

Willie Eldrage Artis passed away on Thursday, June 2, 2022. Holding hands with his beloved Veronica, upright in bed in fresh pajamas and bedclothes, he died at peace and at home. Born in Memphis, Tennessee on May 30, 1934, in the midst of... View Obituary & Service Information

The family of Mr. Willie E. Artis created this Life Tributes page to make it easy to share your memories.

Send flowers to the Artis family.