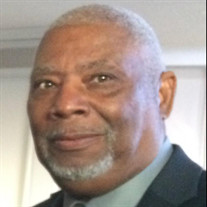 KING, Mr. William "Bill" - Age 76, passed away Tuesday, June 29, 2021 at McLaren-Flint. Family hour 10:00 AM Friday, July 9, 2021 from the Chapel of Lawrence E. Moon Funeral Home, 906 W. Flint Park Blvd., with funeral service commencing at 11:00 AM. Interment Sunset Hills Cemetery, G-4413 Flushing Rd. Friends and pallbearers will assemble at the Funeral Home 10:00 AM Friday. Mr. King will lie in state in the Chapel of Lawrence E. Moon Funeral Home and may be viewed from 12:00 PM-6:00 PM Thursday. Mr. William E. King was born in Mobile, Alabama, September 23, 1944 the son of Gency Mae Black. He was the eldest of his siblings. Bill was baptized at Antioch Baptist Church in Flint, Michigan, where he attended from a young age. Bill attended Flint Central High School and graduated in 1963. He played both baseball and basketball for Central, even winning Championships in both sports during his Senior Year. He was employed at Buick Engine Division, a Division of General Motors Corporation, before retiring after 30 years of service in 2000. Bill met his wife Rose M. King in June 1985 and they married on October 28, 1989. Bill and Rose were a devoted couple, he loved and catered to his wife of more than 32 years. he was a loving husband, father, son and grandfather. Bill was an accomplished bowler and recorded several perfect 300 scores. He was an avid fisherman, not to mention his love for sports and politics. He would watch one on TV and listen to the other on the radio at the same time. Back in the day he would stack 2 or 3 TVs, so that he wouldn’t miss any of his programs. He took pride in his BBQ technique. He would slow cook his ribs a minimum of 8 hours, to achieve perfection. Mr. William E. King leaves to cherish his memory: his wife, Rose King of Flint; mother, Gency Mae Black; daughters, Felicia King-Houston of Fort Worth, TX and Angela King of Mt. Morris, MI; sons, Earl (Tanya) Jordan of Warren, MI and Darius Young of Flint; sisters, Sherra King, Diane King, Linda Black-Turner, Jodie Loretta Black and Cynthia (Minister Charles) Clarke, all of Flint, Dorothy Black of Glenn Heights, TX, Vivian (Bobby) Wesley of Moss Point, MS and Verita Brown of Detroit, MI; brothers, Joe King of Flint, George (Shirley) King of Beatrice, AL, Prince Black Jr. of Lancaster, SC and James (Alice) Black of Prosper, TX; brother-in-law, John (Geneva) Gillian; 19 grandchildren, including Antonio King, whom he raised as his son; 22 great grandchildren; a host of nieces, nephews, other relatives and friends. Bill was preceded in death by: his grandmother, Jodie Millender; brothers, Harris “Don” King, Harold Black, Thomas Black and Eric Nettles; mother-in-law, Rachel Myrick; sister-in-law, Linda Prince; aunt, Irma Pryor, and nephew, Andre King.

The family of Mr. William "Bill" King created this Life Tributes page to make it easy to share your memories.

Send flowers to the King family.