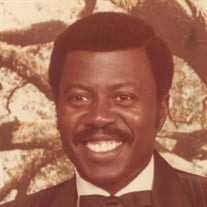 OWENS, Mr. Walter E. - Age 83, passed away Thursday, October 7, 2021 at ProMedica Skilled Nursing Facility formerly known as Briarwood in Flint, MI. Family hour 1:30 PM Saturday, October 16, 2021 from the Chapel of Lawrence E. Moon Funeral Home, 906 W. Flint Park Blvd, with funeral service commencing at 2:00 PM. Family and friends will assemble at the funeral home 1:30 PM Saturday. Mr. Owens will lie in state in the Chapel of Lawrence E. Moon Funeral Home and may be viewed from 12:00 PM-6:00 PM Friday. Mr. Owens was Honorably Discharged from the United States Army and the United States Air Force. Walter E. Owens, 83, or more affectionately known as Ray, Mr. Walter, Granddaddy Ray and Pa, fell asleep in death in his hometown of Flint, Michigan on October 7, 2021. Walter was a loving husband of his wife of 43 years, Veronica Owens of Flint, Michigan. Ray was a caring father of his “girls”, Belinda Pirtle, Brenda Rembert, Sharon Owens, Harriet Green and Cynthia Owens. Mr. Walter was a cherished stepfather of Rosemarie Roudette, Diana Charles, Stephanie Charles and Francis Charles. He was Granddaddy Ray or Pa as the respected grandfather of Shawn Powell, KiJuana Owens, LaJuan Rembert, NaKeshia Philippe, Shanelle Robinson, Courtney Rembert, Natasha Roudette, Nadia Roudette, Brent Crews, Ruth Owoseni and a host of great-grands. Even though being born in Flint to Fred Dorn and Mattie Lee Francis, Walter grew up on the streets of New York. You may not have envisioned a young man like him playing the violin, but he was amongst those offered a scholarship to the Juilliard School of the Arts! After graduating high school, he entered the military and served in the Army and Air Force Reserve. Eventually, he departed from New York City and moved his family to his mom’s hometown of Murfreesboro, Tennessee. Lastly, he returned to Flint where he worked and retired from the United States Post Office. Everyone knew that his favorite pastime was sports. Walter was a people person, and anyone who met him loved him. When he laid that captivating smile on you, you just had to smile back.

The family of Mr. Walter E. Owens created this Life Tributes page to make it easy to share your memories.

Send flowers to the Owens family.