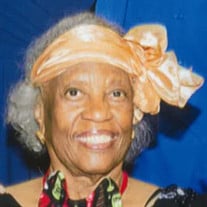 LUSANE, Mrs. Voncile - Age 88, passed away Sunday, December 26, 2021 at McLaren-Flint. Family hour 11:00 AM Friday, January 7, 2022 at Canaan Baptist Church, 910 E. Gillespie St., with funeral service commencing at 12:00 PM, Pastor Charles Roots, officiating. Entombment Flint Memorial Park Cemetery, G-9506 N. Dort Hwy., Mt. Morris, MI. Friends and pallbearers will assemble at the Church 11:00 AM Friday. Mrs. Lusane will lie in state in the Chapel of Lawrence E. Moon Funeral Home, 906 W. Flint Park Blvd., and may be viewed from 12:00 PM-6:00 PM Thursday.On December 26, 2021, God opened his loving arms and extended his hand to the gentle spirit of Voncile Lusane. Voncile Lusane was born June 18, 1933 in Evergreen Alabama, the only daughter of Walter and Pearl Knight. Sister Lusane was the youngest of 6 children. She was raised in a loving home and understood the meaning of having a personal relationship with God early on in life. Voncile received her formal education at Conecuh County High School in Alabama, where she received her diploma. She also was a member of the girls basketball team. As time went on she also tried her hand at a little tennis. In 1953, Voncile married the love of her life, Herman Lusane on March 10, 1953 in Holy Matrimony. Shortly afterwards they moved to Flint, Michigan. They settled down and began raising 4 children. She was a loving, caring, devoted wife and mother, that made sure her family was taken care of. Sister Lusane was very active in her community. She was much involved and being a participant in P.T.A., school sports, Girls & Boy Scout. She was also a Teacher Assistant. Sister Lusane began her employment working at AC Spark Plug and Buick, divisions of General Motors Corporation for a short while. Knowing this was not what she had in mind to do. She had several jobs before she found the right one for her. So furthering her education she began attending Mott Community College where led her to getting her CNA Certificate in Health Care. Sister Lusane began working at Genesee Memorial Hospital and worked her way up to Sterile Processing Tech., this is where she stayed until she retired in 1994. She became a Foster Mother in the early 80’s, as a result her and Brother Lusane became Adoptive Parents. Sister Lusane also was a member of the Order of Easter Star, Willie Carter Chapter #180 and member of Sister United. She joined a bowling league in the mid 70’s thru 2000’s, enjoying every minute. Sister Lusane loved cooking her famous Pineapple Coconut Cakes for the family, she loved cooking period. She would always have a big family dinner anytime. She also loved traveling when she was able. Oh she loved to watch sports on TV, football, basketball, baseball, any sport no mater what it was. Sister Lusane was a very direct person, she would tell you just what’s on her mind. No going around the bush. Also, she was very feisty, I mean feisty, for those who knew her, but loving and caring. She also cared for the sick in the family, when there was a need, she would help. Caring was her life, life was caring! She also was into politics and voting rights. Sister Lusane wanted to make sure you knew your rights. She was one of Sister Vera Rison’s biggest supporters. Sister Lusane loved her church, she could not attend like she wanted, but was always there in spirit. She praised the Usher Board Team she was on, she always would say they had it together because she was on their team!!! Sister Lusane would say “let love be your light.” Sister Voncile Lusane leaves to cherish her memory: adored family, children, Ralph (Elaine) Lusane, Deborah (Arthur) Dent, all of Flint, Tammie (Ronnie) Moss of Loganville, GA, Herman (JoAnn) Lusane Jr., Willie James (Lois) Roach of Omaha, NE and Terrell (Asley) Moncreff of Iowa; grandchildren, Delano Stanley, Sherron (Sandra) Lusane, Yukima Lusane Moss, Tyvon Lusane, Ralkeita (Donald) Hamlin, Najah (LeDarion) Scoot, Aseelah Dent, Tyshea Lusane, Tony (Wendy) Toliver, Brenetta Miller, Allegra Roach and Davonna Whitecomb; 30 great-grandchildren; 2 great-great-grandchildren; special niece and nephew, Robyn and Shawn Polachek, Gloria and Charles Bias, Anahl Lipkins, Shirley Lusane, Margaret Lusane Smith, Doloris Knight, Joey Lusane, Therman Lusane Jr., Dewey Knight Jr.; special brother-in-law, Therman Lusane Sr. Sister Lusane was preceded in death by her husband, Herman Lusane Sr.; granddaughter, Deborah Dent; parents, Walter Knight and Pearl Mitchell Knight; brothers, David Chatman, Roy Chatman, James Knight, Albert Knight and Dewey Knight; sister-in-law, Mable Lusane. The family would like to express special thanks to Pastor Charles Roots and Canaan Baptist Church family, and to all our friends and family, Christy Peterson, Tameka Stinson and Ivory House, Mrs. Mary Williams and family, the Rison, Green and Lusane families.

The family of Mrs. Voncile Lusane created this Life Tributes page to make it easy to share your memories.

Send flowers to the Lusane family.