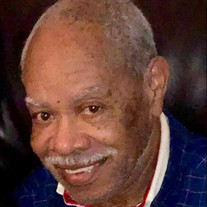 TILLMAN, Mr. Victor Grant - Age 84, passed away Wednesday, December 8, 2021 at his residence. Family hour 10:00 AM Tuesday, December 21, 2021 from the Chapel of Lawrence E. Moon Funeral Home, 906 W. Flint Park Blvd., with funeral service commencing at 11:00 AM. Interment Sunset Hills Cemetery, G-4413 Flushing Rd. Friends and pallbearers will assemble at the funeral home 10:00 AM Tuesday. Mr. Tillman will lie in state in the Chapel of Lawrence E. Moon Funeral Home and may be viewed from 12:00 PM - 6:00 PM Monday, December 20, 2021. Mr. Victor Grant Tillman was born November 25, 1937 in Grenada, Mississippi, the son of the late Robert and Victoria Tillman. After graduating from Grenada High School, Victor attended Grambling State University where he played baseball and developed his love for golf. He graduated with a Bachelor of Science Degree in Biology. After graduation, Victor relocated to Chicago, Illinois to be near his siblings before moving to Flint, Michigan to work at Fisher Body, a division of General Motors Corporation in Industrial Engineering. Victor retired after 30 years of service. He wed twice in his lifetime. The first marriage resulted in the birth of his twin sons. The second marriage, is where he met the love of his life, Joyce Elizabeth (Hayes) Tillman and they shared a marital union until her death in 1995. Victor was an active member of Quinn Chapel African Methodist Episcopal Church where he served in the following capacities: Chancel Choir, Men’s Fellowship, Men’s Chorus, Sunday School, Male Missionary, Stewart Emeritus, and Class Leader Number 1. Victor loved his Quinn Chapel Family. Victor was an avid golfer and bowler. He won numerous trophies which displayed his successes for both hobbies that expanded from the Flint area throughout his travels with the United States. For a number of years, he was member of The Flint Golf Club. His love of golf was shared with his family and friends which will allow his memory to continue to live on. Although Victor loved his alma mater, Grambling State University, he was a passionate University of Michigan fan where he and his late wife, Joyce shared their excitement for tailgating events and attending football games. Victor was also a great cook of Southern cuisine and took pride in his BBQ Ribs and Red Beans and Rice. He loved to travel and shared his love of Jazz with his children. Those who knew Victor, knew he would strike up a conversation with a complete stranger and make friends anywhere and everywhere he’d go. He always had a story to tell and would leave people in laughter. Victor was most definitely a people person and he will truly be missed by those who truly loved him. Mr. Victor Grant Tillman leaves to cherish his memory: devoted daughter, Anita Marie (John Joshua II) Maynie of Oakland, MI; sons, Alex Hayes of Austin, TX, Walid (Monique) Hanif of Cairo, Egypt, Elvinn (Cheryl) Tillman of Del City, OK and Elliott Tillman of Edmond, OK; grandchildren, Robert Alexander (Nicole) Maynie of Sterling Heights, MI, John Joshua (Taylor) Maynie III of Kansas City, MO, Jessica Victoria (Rashad) Sayles of Oakland, MI, Hajj Hanif of Cairo, Egypt, Trinitee, Kenadee and Isaiah Tillman, all of Del City, OK and Joseph Tillman of Edmond City, OK; great-grandchildren, Robert Jr. “RJ” and Ariana Maynie, Jaxon and Raina Sayles; sisters-in-law, Eileen Hayes and Evelyn Bacon, both of Flint; a host of nieces, nephews, cousins, other relatives and friends including special friends, Regis (Teresa) Allison of Lafayette, LA and Sheila Phillips of Chattanooga, TN. Mr. Tillman was preceded in death by his wife, Joyce Elizabeth Tillman; parents, Robert and Victoria Tillman; 5 sisters, Ophelia, Ella, Ann, Ethel, Ruby and Minnie Fuller; and brother, Albert. The family would like to express special thanks to The Park at Franklin and AdvisaCare Hospice staff of Southfield, MI for their dedication and care for Victor during his stay. In memory of Victor Grant Tillman, memorial gifts may be donated to Alzheimer’s Association.

The family of Mr. Victor Grant Tillman created this Life Tributes page to make it easy to share your memories.

Send flowers to the Tillman family.