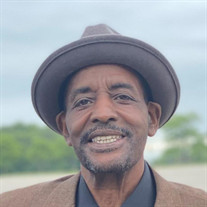 MURPHY, Mr. Tony Lawrence - Age 64, passed away Sunday, December 12, 2021 at McLaren-Flint. Family hour 10:00 AM Monday, December 20, 2021 at House of Prayer C.O.G.I.C., 1116 E. Humphrey Ave., with funeral service commencing at 11:00 AM. Interment Sunset Hills Cemetery, G-4413 Flushing Rd. Friends and pallbearers will assemble at the church 10:00 AM Monday. Mr. Murphy will lie in state in the Chapel of Lawrence E. Moon Funeral Home, 906 W. Flint Park Blvd., and may be viewed from 10:00 AM - 4:00 PM Sunday. Mr. Tony Murphy was born June 28, 1957, in Little Rock Arkansas, the son of the late James and Janice Lee (Pettus) Murphy. He moved to Flint, Michigan with his family at a very early age. He was a graduate of Flint Northwestern High School class of 1975. After which he attended Mott Community College. May 25, 1986, he married his wife Janice M. Gill Murphy were married for 36 years. He worked as a custodian for the Beecher Community School District until his retirement in 2008. During his time with Beecher School, He left an indelible impact on countless students. While there he developed an after-school chess club and he coached both Freshman and Junior varsity football teams. Mr. Murphy enjoyed fishing, playing chess, working odd jobs, spending time with his family and friends and cooking. He never met a stranger and loved to feed everyone. He was highly skilled in floor restoration. His expertise was sought after by many. He was a faithful member of the House of Prayer Full Gospel COGIC where he made himself available to serve in any way he could. Mr. Tony Murphy leaves to cherish his memory: His loving wife, Janice M. Murphy, 3 daughters, Lashanda Killins, Sakia Murphy, Salina (James) Bowie; 1 son, Brandon Murphy, all of Flint; 4 grandchildren; Kaitlyn, Kelly, Connor and Kevin; 1 sister Pamular Murphy; 3 brothers, Autry(Deborah) Murphy, Cedric Murphy and Anthony Murphy, all of Flint; a host of nieces, nephews and other relatives and friends including special friends, Mr. Charles Hudson, Mr. James Gill, Mr. Bobby Collins and Mr. Lamar Harris. Mr. Murphy was preceded in death by his parents, James and Janice Murphy; sister Joyce Murphy; brothers Tyrone Murphy, Larry Murphy and Sherman Murphy; Grandparents, James and Nannie Pettus. The family would like to express special thanks to their extended families and friends, Lawrence E. Moon Funeral Home, the staff at Kindred at Home, McLaren hospice, And his nurse Andrew Wald. Dr. Josephine Bello and Dr. Sandeep Grewal. Pastor James O. Bowie II and the House of Prayer Church family.

The family of Mr. Tony Lawrence Murphy created this Life Tributes page to make it easy to share your memories.

Send flowers to the Murphy family.