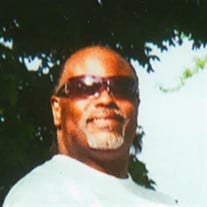 McWRIGHT, Mr. Tony Charles - Age 53, passed away Sunday, February 27, 2022 at Hurley Medical Center. Funeral service 11:00 AM Thursday, March 10, 2022 from the Chapel of Lawrence E. Moon Funeral Home, 906 W. Flint Park Blvd., Pastor Ezra Tillman Jr., officiating. Interment Sunset Hills Cemetery, G-4413 Flushing Rd. Friends and pallbearers will assemble at the Funeral Home 11:00 AM Thursday. Mr. McWright will lie in state in the Chapel of Lawrence E. Moon Funeral Home. There will be no public viewng. Mr. Tony Charles McWright was born May 27, 1968 in Pineville, Louisiana, the son of Leon and Annie Alexander. Tony’s parents traveled a lot once they settled in Saginaw, MI. He attended Central Junior High School and later Saginaw High School, there he noticed he had a love for music. While in high school he got with some friends and formed a band called “Love Child.” Tony loved to play the guitar. After graduation he began collecting guitars, he loved his private jam sessions. He started working at the age of eighteen, his first job was at the pickle factory. Tony went on to work for his uncle at the Music Planet. He worked there for twelve and a half years, that’s where he met his wife and married. Tony became a loving husband and father. He went on to provide for his family, he worked several factory jobs such as, Frankenmuth Chocolate Factory, Spiral Industries, Pontiac Coral and Toruka Industries, Security Packaging and Bungaflex. Tony work until his healt failed. He loved traveling and spending time with his family instilling morals in his children and grandchildren. Tony loved the great outdoors, waling and riding his bike through the nature center. He would find peace at the water. Tony had the gift of helping others; whenever and how he could and never wanted anything in return. He gave his life over to the Lord before his passing. Mr. Tony Charles McWright leaves to cherish in his memory: beloved, devoted wife of 22 plus years, Mrs. Terry M. McWright who will forever be in his heart up above in heaven; 2 children, Adontae’ Walton and Shy’brea Walton (fiancé, Keith Ampy); 2 grandchildren, Amaya R. Hilliker-Walton and Kiara M. Ampy; mother, Ms. Annie Alexander; brother, Sean Alexander; niece and nephew, Hayden and Aida Alexander; favorite uncle, Carter McWright; father-in-law, Mr. Don A. Walker Sr.; a host of sisters-in-laws and brothers-in-laws, aunts, uncles, cousins of Houston, TX, Shreveport, LA and Grand Rapids, MI; best friend of 30 plus years, Maurice (Alfreda) Randle. Mr. McWright was preceded in death by his grandparents; niece, Sara Alexander; mother-in-law, Mozella Walton-Walker; brother-in-law, Isaac Walton.The family would like to express special thanks to Pastor Ezra L. Tillman Jr. and First Trinity Missionary Baptist Church, Ascension Genesys Hospital staff and Hurley Medical Center. Thanks to you all for the heartfelt prayers and condolences.

The family of Mr. Tony Charles McWright created this Life Tributes page to make it easy to share your memories.

Send flowers to the McWright family.