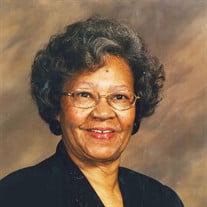 STRAHAM, Mrs. Tommie - Age 93, passed away Tuesday, February 22, 2022, at her residence. Family hour 1:30 PM Sunday, March 13, 2022, from the Chapel of Lawrence E. Moon Funeral Home, 906 W. Flint Park Blvd., with memorial service commencing at 2:00 PM. Family and friends will assemble at the funeral home 1:30 PM Sunday. There will be no public viewing. Mrs. Mildred Vivian Straham, known to us as “Granny” and to Family as “Sister” was born July 6, 1920 in Waco, Texas. The daughter of the late Mr. and Mrs. Ollie and Etoy Lewis. Mildred and her family moved to Flint, Michigan in 1947. She went on to become a licensed cosmetologist in the State of Michigan. Mildred became employed with General Motors on January 8, 1954 later retiring February 1, 1993 from the Fisher Body Coldwater plant with 39.2 years of service. Mildred was a member of New Life Missionary Baptist Church where she served on the Mother’s Board under Pastor Wilbert E. Campbell. She enjoyed watching CNN, keeping tabs on the past president number 45, sipping on Maxwell House Coffee and smoking her Kool Mild 100’s (the ones in the blue box). Her favorite foods were catfish, shrimp, and pound cake, but what she loved most of all was spoiling her great grandchildren Aireka and Erick Lewis. Mrs. Mildred Vivian Straham leaves to cherish her lasting memories in the hearts of: devoted granddaughter and caregiver, Tamika Lewis; great-grandson, Erick Lewis; great-granddaughter, Aireka Lewis, all of Flint, MI; daughter, Ajdron Rogers; granddaughter, Taniecea Rogers; great-granddaughter, Arris Rogers, both of Flint, MI; step-daughters, Margaret Shepherd and Donna Bettis of Detroit, MI, Lashawandra and Kids; a host of nieces, nephews, god-children and friends. In her 101 years of life. Granny touched the hearts of everyone. Anyone she encountered was family. Her memory will live on through all of us. Mildred was preceded in death by her parents, Ollie and Etoy Lewis; daughter, Etoy Lewis; granddaughter, Deana Lewis; great-granddaughter, Pretoria Richmond; brothers, Ollie Jr; Charles, Hubert, Harlen, Eric and Willis; god-son, Mack Parrish IV. The family would like to extend special thanks to the staff of the Medical Team Hospice, especially Keishia and Ebony, Pastor Wilbert Campbell and New Life MB Church Family, Michigan Health Specialist Cherrell-Shells.

The family of Mrs. Tommie Straham created this Life Tributes page to make it easy to share your memories.

Send flowers to the Straham family.