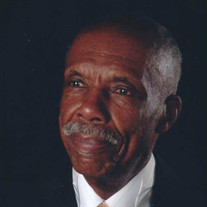 SHOOK, Mr. Samuel "JD" - Age 84, transitioned from this life on Saturday, August 21, 2021. He was the only child, born November 7, 1936 to Samuel JD Shook, Sr, and Verna Mae Thomas in Flint, Michigan. He attended Flint Public Schools, and played a number of sports. Samuel attended Flint Junior College, 1955-1957, and later joined the army. He served four years, stationed in Anchorage Alaska and was honorably discharged. Samuel worked at General Motors in Flint, Michigan from 1962-1966. He later became employed at E.I. Dupont Corp. in Flint, Michigan as the first African-American pump man, first African American manufacturing supervisor for 30 years, retiring in 1997. He was dedicated to serving on many levels. He found great joy in being a member of the Auxiliary Volunteer Program at HCA Houston Healthcare Northwest. Every Tuesday through Thursday, you could find JD volunteering. He had a true desire to serve his community and he felt this was one way he could do that. One of his greatest contributions was the provision and the care he provided for his family, on a level that was above natural expectations. His quiet strength and presence provided an atmosphere of security that will last through generations to come. He was very proud of his Masonic & Shriner Family’s, He was initiated into the Masons on October 23, 1965, where he was a valued and respected member for over 55 years. He was raised to Master Mason level January 22,1966, and AEAONMS May 29. 1966. In 1990 he also became an honorary member of the United Supreme Council Southern Jurisdiction. Samuel worked on the committee for Dean of Instructions, before he became the Dean of Instructions in 2005 for the United Supreme Council for the Northern Jurisdiction. In 2010 he became an Honorary Past Imperial Potentate. Everyone knows and respects the phrase it is “SHOOK TIME”. He believed in teaching his younger generations the necessary skills to become respectable and productive citizens. He was the owner of the (family owned) Southside Community Store for 60+ years. For many years it was the longest black owned business in the community of Flint Michigan. He was preceded in death by his parents, Samuel JD Shook, Sr., Verna Mae Shook, along with his previous wife Miola Shook and his sons Robert Lee Dunn and Larry Dunn. His marriage to Miola Shook produced 13 grandchildren, many great grandchildren, with many others who affectionately called him “Pops.” He is survived by his wife of 10 years, Renate Bean-Shook, his 2 daughters Verna Mae Dunn Shook, and Jacqueline Dunn Shook. Also had Bonus children inherited by his marriage to Renate, (DarTanya D. Gardner, Milton Gardner, Linzy “Trey” Bean, Wesley Joshua Bean, Caleb “JP” Bean, Paris R. Bean). Plus 8 grandchildren were also inherited in this marriage.

The family of Mr. Samuel "JD" Shook Jr. created this Life Tributes page to make it easy to share your memories.