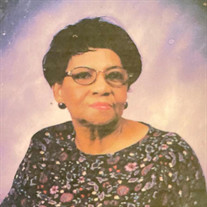 BARNES, Mrs. Ruby T. "Jean" - Age 97 passed away Tuesday, January 18, 2022, at her residence. Family hour 1:30 PM Friday, February 4, 2022 from the Chapel of Lawrence E. Moon Funeral Home, 906 W. Flint Park Blvd., with funeral service commencing at 2:00 PM. Interment Flint Memorial Park Cemetery, G-9506 N. Dort Hwy., Mt. Morris, MI. Friends and pallbearers will assemble at the Funeral Home, 1:30 PM Friday. Mrs. Barnes will lie in state in the Chapel of Lawrence E. Moon Funeral Home, and may be viewed from 12:00 PM-6:00 PM Thursday. Ruby Tha Barnes known as Jean to some and little mama to others, was born September 25, 1924 in Houston, Texas. She was born to Wesley Branch and Edna Phillips, the only child to Edna Phillips. Ruby was a resident of Flint, Michigan and a Faithful Member of Vernon Chapel AME Church. She was a loyal, dedicated housewife who enjoyed spending time with her family and also assisted her husband in the entertainment industry. Ruby was always known to be very well dressed. She enjoyed cooking, music, dance and going to church. Ruby was a big supporter of those around her that she called friends and family and also those in the community. Ruby Tha Barnes leaves to cherish in her memory: devoted, dedicated son, Lawrence “Larry” A. McKinney of Flint; only great-granddaughter, Alicia (Chuck) Bailey of Southfield, Michigan; great-great-grandson, Aubrey Bailey Jr.; God-given grandchildren, George Bishop and Kimberly Roman. Ruby was known to her grandchildren as Gigi. She LOVED her grandchildren and always supported them. She will be missed by a host of many special friends and family members, the Wilkins, Bonds and Barnes families, County Commissioner Rillastine Wilkins, Tammy and Woody Etherly, Mary Elizabeth, Alberta Barnes, the Baldwin and Jones family, Mary Brady and the Addison Street family; a host of friends to Larry McKinney from Saginaw, MI, Grand Rapids, MI, Muskegon, MI and Texas. Those young men and women who have crossed her path who she took under her wing. Ruby was preceded in death by her husband, James “Jimmy” Barnes; grandson, Jerome “Jerry Baldwin; mother, Edna Phillips; and God-given sister, Joyce Mitchell. The family would like to express special thanks to the staff of Wellbridge and Compassus, Blackwell AME Zion, those who have helped and supported over the last few years when mother fell ill.

The family of Mrs. Ruby T. Barnes "Jean" created this Life Tributes page to make it easy to share your memories.