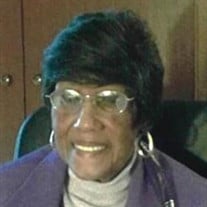 WARD, Mrs. Rosemary C. Age 82, passed away Sunday, August 8, 2021 at Willowbrook Manor. Funeral service will be held 11:00 AM Friday, August 13, 2021 at Bethel United Methodist Church, 1309 N. Ballenger Hwy. Friends and pallbearers will assemble at the church 11:00 AM Friday. Mrs. Ward will lie in state in the Chapel of Lawrence E. Moon Funeral Home, 906 W. Flint Park Blvd., and may be viewed from 12:00 PM - 6:00 PM Thursday with family present from 4:00 PM - 6:00 PM to receive friends. Rosemary Carlotta Jones Ward was born on July 6, 1939 in Little Rock, AR to the late Samuel P. and Alberta H. Jones. She departed this life on earth Sunday, August 8, 2021. What laid the foundation for her educational journey was attending South End Elementary School in Little Rock, AR. In 1955, at the age of sixteen, she graduated from Paul Lawrence Dunbar High School of Little Rock, Arkansas. Afterwards, she attended Arkansas A.M. & N College (now referred to as University of Arkansas at Pine Bluff), where she earned her Bachelor of Science degree in Biology with a minor in Chemistry in 1959. She furthered her education by doing practice teaching at Philander Smith College in Little Rock, AR, and graduate courses in education at the University of Michigan – Ann Arbor. After brief employment at both Flint Osteopathic and McLaren Hospitals, she began her teaching career at Parkland Elementary and continued in the profession by teaching at Martin Elementary and Freeman Elementary, where she retired in 2002. Rosemary gave her life to Christ at an early age and began her Christian journey at Wesley Chapel United Methodist Church in Little Rock, Arkansas. After relocating to Flint, she became a faithful serving member of Bethel United Methodist Church where she served in many capacities in the United Methodist Church. In 1977 she became a certified Mission Study Leader in the areas of Covenant Living, Human Rights, Pluralism, Refugee, People of the Pacific Islands, and Public Education – teaching these classes at Adrian College, Albion College, Flint, Detroit, Redford, Waterford, and Gaylord, Michigan. In 1984, she was elected as the first African American Lay Leader for the Detroit Conference, representing 140,000 lay persons in 511 United Methodist churches of the Upper Peninsula and eastern Michigan. During that same year, she was one of nine lay persons elected as a delegate to the Bicentennial General Conference of 1,000 persons across the United States and abroad. As the first female president of Detroit Conference Black Methodists for Church Renewal (BMCR), she worked for the election of African American Bishops in the North Central Jurisdiction, as well as ensuring ethnic minority inclusion on General boards and agencies. She also served as a Lay Speaker and advocate for Phase III of the National United Methodist Women’s Campaign for Children. After retiring, she continued to serve in different capacities within Bethel and the United Methodist Church. She was heavily involved in various community organizations such as Jack and Jill of America, National Council of Negro Women, Victorious Christian Women, Metropolitan Chamber of Commerce, Urban League and the NAACP. She was the Superintendent of the Dort-Oak Park Neighborhood House New Sunday School for a New Day. She was also a part of the Zeta Beta Omega Chapter of Alpha Kappa Alpha Sorority, Inc. and the Gamma Delta Chapter of the National Sorority of Phi Delta Kappa, Inc. until her passing. On January 26th, 1963, Rosemary was united in Holy Matrimony to Jesse James Ward of Tarboro, North Carolina. During their union, they enjoyed laughing, dancing, and entertaining the Tucker-Ward Family Club members. She was a very loving and devoted wife until his death in 1973. As a young 33 year-old widow, she became devoted and even more committed to the challenge of raising their three young sons. Because of this challenge and determination to raise them to be well-rounded men, she became familiar with sports and other activities that young boys participate in. Rosemary loved her family and leaves to cherish in her memory: loving sons, Anthony D. (Renisha) Ward, Sr. of Little Rock, AR, Gerald K. Ward of Marietta, GA; stepson, James Stephen Ward of Columbus, OH; three grandchildren, Joanna C. Ward of Little Rock, AR, Carlie S. Ward of Austin, TX, Anthony D. Ward, II of Little Rock, AR; one great-grandchild, Jadyn E. Boston of Little Rock, AR; two godsons, Wesley Roberts-Bey of Flint, MI, Jason Clemens of Toledo, Ohio; and a host of other nieces nephews, relatives, and friends. Preceded in death were her parents Samuel P. and Sadie Alberta Jones, Sr.; husband, Jesse James Ward; siblings, Samuel P. Jones, Jr., Laura J. Thompson; mother and father-in-law, Jutson and Maggie Ward, Sr.; brother-in-laws, Billye G. Thompson, Sr., Jutson Ward, William Ward; sister-in-laws, Dorothy Pittman, Mary Jackson, Ruth Pritchard; and her long-time beaux of 30+ years, Russell Roberts-Bey. Rosemary was a loving daughter, sister, wife, mother, grandmother, aunt, and friend. Her presence will be forever felt and deeply missed by all those she encountered.

The family of Mrs. Rosemary C. Ward created this Life Tributes page to make it easy to share your memories.

Send flowers to the Ward family.