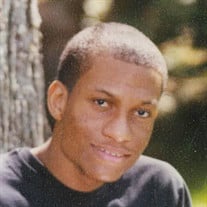 MOORE, M. Robert David II - Age 33, passed away Tuesday, November 9, 2021 at University of Michigan Hospital - Ann Arbor. Family hour 10:00 AM Saturday, November 20, 2021 at Shiloh Missionary Baptist Church, 2120 Saginaw St., with funeral service commencing at 11:00 AM Pastor Daniel Moore officiating. Interment Sunset Hills Cemetery, G-4413 Flushing Rd. Friends and pallbearers will assemble at the church 10:00 AM Saturday. Mr. Moore will lie in state in the Chapel of Lawrence E. Moon Funeral Home, 906 W. Flint Park Blvd., and may be viewed from 12:00 PM - 6:00 PM Friday.In my father’s house are many mansions; if it were not so I would have told you. I go to prepare a place for you, I will come again, and receive you unto myself: that where I am there ye may be also.” John 14:2-3 .Our beloved son, brother, grandson, cousin and dearest friend went to his eternal home to be with the Lord on Tuesday November 9, 2021, at the age of 33 years old. Robert was a blessing to Robert and Wendolyn Moore on September 30, 1988. Robert Graduated from Grand Blanc High School in 2007, where he continued his education at Mott and Eastern Michigan University. Robert was in the Theatre Program and worked as a crew member in the Theater Program, he also worked at the commons as a Cook and Host. Robert loved to write poems and stories and was a Great Actor. He was involved in the Perlis Players at McCree Theater, and the EM Theater Program. Robert as everyone knew him was kind, grateful, and had a loving smile. Even though everything he was going through he never gave up. Robert was involved in the community, where he lived and always a shoulder to lean on. He loved his family, friends, and was compassionate and caring for those who were around him. He also loved little children. Robert’s love for the Lord runs deep, he found joy in accepting Jesus as his Lord and Savior. He loved going to church and praising God. Being part of the University Christian Fellowship and Shiloh Baptist Church brough him so much peace. Those he leaves behind are: father and mother, Robert and Wendolyn Moore; sister, Whitney Moore, all of Flint; 4 aunts, Mrs. Veronica (Larry) Simmons of Las Vegas, NV and Ms. Wyvonne McFadden; of Flint, Mrs. Lisa (Raymond) Rayford, all of Flint, Mrs. Jennifer McFadden of Jensen, MI, 3 uncles Mr. Aaron (Husniyah) McFadden, Mr. Michael (Clarice) McFadden and Mr. Thaddeus McFadden of Madison, WI; god-parents, Mrs. Martha (Rev. Louis) Mays; god-sisters, Kimberly Robinson and Whitney Boose; cousins, Mr. Dwayne (Crystal) Fulton, Mr. Thaddeus McFadden Jr., Mr. Dramell (Sabre) Fulton, all of Flint, Mr. Larry (Marilyn) Simmons Jr., Mr. Jalen McFadden, Miss. Sabria McFadden, Lance Simmons, all of Las Vegas NV, Mr. Antoine Lewis, Mr. Montrell Lewis, Erving McFadden of Flint and Miss Tianna McFadden of Dallas TX; a host of others cousin and friends. The family would like to express special thanks to Rev. and Mrs. Daniel Moore, the Shiloh Missionary Baptist Church family, U of M Hospital Ann Arbor, MI Social Workers, Saint Joseph Hospital, Dr. Kennedy, Dr. Geraldine Chaney and U of M Kidney staff, Robert was preceded in death by his grandfathers, Robert H. Moore and Rev. Aaron McFadden; grandmother, Carrie E. Moore; and uncles, Steven McFadden and Wilford McFadden.

The family of Mr. Robert David Moore II created this Life Tributes page to make it easy to share your memories.