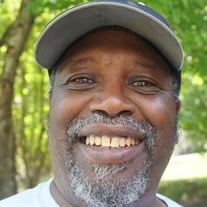 MILLER, Mr. Robert L. - Age 66, passed away Wednesday, January 5, 2022, at Hurley Medical Center. Family Hour 1:30 PM Tuesday, January 18, 2022, from the Chapel of Lawrence E. Moon Funeral Home, 906 W. Flint Park Blvd., with funeral service commencing at 2:00 PM. Interment Sunset Hills Cemetery, G-4413 Flushing Rd. Friends and pallbearers will assemble at the funeral home, 1:30 PM Tuesday. Mr. Miller will lie in state in the Chapel of Lawrence E. Moon Funeral Home and may be viewed from 12:00 PM-6:00 PM Monday.Robert LaVerne Miller was born on February 17, 1955, in Flint, Michigan, the son of Flora and Bruce Miller and the last of two children. Robert grew up in Flint, Michigan and attended the Flint Jr. Academy for grades 1 – 8, and graduated in 1973 from Adelphian Academy in Holly, Michigan. After graduation from High School, he started college at Andrews University in Berrien Springs, Michigan and graduated with an Associate Degree in auto mechanics. Robert returned to Flint and began to work for the city of Flint as a mechanic and retired after 26 years in 1997. After retiring, Robert went back to college and became a Respiratory Therapist. He worked at various Centers for the Aged around the city and retired for the second time in 2019 when his love and devotion for his family took center stage. Robert was a lifelong member of the Fairhaven Seventh-day Adventist Church in Flint, Michigan. He served as a Deacon, worked with the Community Service Department, was a Pathfinder Finder leader, a member of the Treasury Dept., and was a firm believer in Christian Education. Robert’s generosity to others was genuine. He was always willing to help others even if it meant sacrificing his personal needs. He always lived by the golden rule “Do unto others as you would have them do unto you.” Robert was a kind and loving husband of over 28 years to his wife Angela, as well as an amazing father. One of Robert’s biggest accomplishments was being a father and grandfather. His children, Angel and Jessica, thought of him as being the best father in the world. He was always there for them through their ups and downs, and he taught them to always keep Christ first in their lives. Outside of his faith, there was nothing on this earth that he loved more than his family, especially his grandchildren. He cherished every moment he spent with each grandchild and always looked forward to more. To his grandchildren he was more than just a grandfather, he was a friend, mentor, and second father. Robert Laverne Miller leaves to cherish his memory: wife, Angela Miller; 2 daughters, Angel White (Robert) and Jessica Long (Derek); 7 grandchildren, Nyla, Kyla, Amiyah, Callie, Dallas, Eli, and Levi; brother, Barry Williams; 2 nieces, Heidi Williams and Marcia Whitaker; grandnephews, Christopher Fred and David Whitaker; grandniece, Madison Whitaker; a host of cousins, other relatives, and friends including special friends Ken Byers, Palmer Reid, Shelton Davidson, Greg Williams and Bernard Taylor. Robert was preceded in death by his two grandchildren, Robert White IV and Brooke White; and mother, Flora Miller. The family wish to express their sincere gratitude to all of you for your prayers, presence, love, telephone calls, and other expressions of concern shown during this time of bereavement. Your kindness and love are greatly appreciated. A special thank you to Carol Connor, Dexter Clarke, Olivia Williams, Julia Clark, Millie Anderson, Annette Reid, Avery Clarke, Rose Perez, Ruby Jewell, Lunden Reid, Omni Odum, Bianca Eades, Eden Reid, Gail Rose, Tracy Pierre-Green, Paulina Silverio, Fairhaven Seventh-Day Adventist Church for their continued support during this difficult time.

The family of Mr. Robert LaVerne Miller created this Life Tributes page to make it easy to share your memories.

Send flowers to the Miller family.