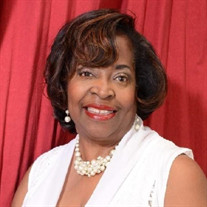 PEARSON, Ms. Rita Maxine - Age 75, passed away Thursday, November 25, 2021 at her residence. Family hour 11:30 AM Saturday, December 4, 2021 at Mt. Pisgah Missionary Baptist Church, 6415 Clio Rd., with funeral service commencing at 12:00 PM Pastor Wallace Hill III, officiating. Interment River Rest Cemetery, G4413 Flushing Rd. Friends and pallbearers will assemble at the church 11:30 AM Saturday. Ms. Pearson will lie in state in the Chapel of Lawrence E. Moon Funeral Home, 906 W. Flint Park Blvd., and may be viewed from 12:00 PM - 6:00 PM Friday with family present from 4:00 PM - 6:00 PM to receive friends. Thursday, November 25, 2021, at age 75, our beloved mother and grandmother, Rita Maxine Pearson, unexpectedly passed away in her home in Mount Morris, Michigan. Rita was born June 21, 1946, in Flint, MI, to parents Janet Day and Max Roberts, Flint, MI. Rita grew up on the Northside of Flint, where people affectionally referred to it as the St. John Street area. Rita’s mother, Janet, later moved her family to a larger home on Page Street. Rita attended Central High School, where she was a scholarly student and earned the opportunity to participate in the Student Co-Op Program. In her co-op position, she worked for the prestigious Irvin Hirsch Jewelers located in downtown Flint; where she was the first woman of color to work at this location. She was later hired full-time after graduating in 1964. After graduation, she attended Flint Community Junior College. Later in life, she earned a diploma from the American Institute of Banking in 1994, and she received a certificate in 1996 from the Managerial Supervisory College. Rita worked over 30 years in banking, retiring in 2002 ending her career with Bank One as the Assistance Vice President Branch Manager. After retiring, she took great joy in her second full-time career; caring for her grandchildren, which she always referred to as “the twins.” Rita accepted Christ at an early age at Bethlehem Temple Church, Flint, MI. She later joined Mt. Pisgah Missionary Baptist Church in Mount Morris, MI, where she was an active member. Rita was a loving, kind, dependable, patient, and compassionate mother, grandmother, sister, aunt, and friend. She gave to and loved her family unconditionally. She may have had a poor sense of direction, but for her family, she would move a mountain if it was required of her. Her strength and commitment to those she loved, was second to none. She always did what was best for her family regardless of what she had to sacrifice to make it happen. Anyone close to her knew that she enjoyed time with her family, especially time with the twins. She was always one to smile and be positive, even during difficult times. Rita loved the game of tennis; she even played on the Genesee Bank tennis team for several years. She enjoyed reading and writing poetry, and she enjoyed light jazz music. She also enjoyed traveling and shopping. Her family especially enjoyed her corny but hilarious sayings like, “ain’t nothing shaking but the leaves on the trees, and they wouldn’t be shaking if it wasn’t for a breeze!” Rita was the glue that held our family together. Many loved Rita and she will be missed by those fortunate to call her mother, grandmother, sister, aunt, or friend. Rita Maxine Pearson is survived and cherished by two children; daughter Monica Pearson of Mount Morris, MI, and son, Channing (Mattie) Pearson of Flint, MI. One granddaughter, Chelsea Pearson, and one grandson, Channing Pearson II, both of Flint, MI. She has three sisters, Linda Allison of Los Angeles, CA., Beatrice Hudson of Flint, MI., Valerie Compton of Flushing, MI, and Mark Day of Los Angeles, CA. Cousin Delores “Jane” White of Flint, MI and brother-in-law, Thomas Pearson of Flint, MI; A host of nieces, nephews, cousins, and friends, including special nieces, Bridget, Kimberly, Deborah Day, and Jasmine Chew. Special nephew, Ricardo Chew. Special friends, Kathryn Ann Johnson, Lueida Grady, Lestine Gheresus, Doris Thomas, Romi Jones, Gloria Quinney, and Judy Thornton, the extended Chaney family, including the matriarch Mary Alice Chaney and special neighbor, Shirley Blair, and family. Rita Maxine Pearson was preceded in death by her grandmother Elijah Compton-Day, her parents, Janet Day and Max Roberts. Sisters, Madeline Dunkling and Gloria Dean Armstead, nieces Tracy Armstead and Pamela Chew, nephews, Jimmy Smith, Tocoby Hudson, Anthony Day, special cousins Florence Moore and Bishop Eugene McCoy. To Live Stream Service: https://youtu.be/Om5aIx4a0wc

The family of Ms. Rita Maxine Pearson created this Life Tributes page to make it easy to share your memories.

Send flowers to the Pearson family.