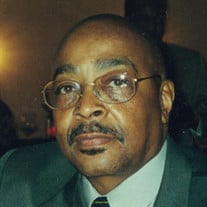 ADAMS, Mr. Raygien - Age 81, passed away Wednesday, April 27, 2022 at McLaren-Flint. Family hour 10:30 AM Saturday, May 7, 2022 from the Chapel of Lawrence E. Moon Funeral Home, 906 W. Flint Park Blvd., with funeral service commencing at 11:00 AM. Rev. Fredrick Flowers, officiating. Interment Sunset Hills Cemetery, G-4413 Flushing Rd. Friends and pallbearers will assemble at the Chapel 10:30 AM Saturday. Mr. Adams will lie in state in the chapel of Lawrence E. Moon Funeral Home and may be viewed from 12:00PM - 6:00PM Friday. Mr. Raygien Adams was born February 23, 1941 in Cleveland, Ohio, the son of the late William Temple and Roesther Aldridge-Adams. Raygien attended and graduated from Cleveland Public Schools. While living in Cleveland, Ray gained employment at General Motors Corporation where he worked until being transferred to Flint, Michigan. In Flint, he worked at Fisher Body Plant and then Grand Blanc Metal Fabricating where he retired with more than 30 total years of service. During his time at the Grand Blanc Plant, Raygen would occasionally lay his eyes on a beautiful young lady walking around who peaked his interest. One day, taking advantage of the opportunity, he made his move to find out more about this beauty. Ray discovered that her name was Joan Powell and that she was the mother of two teenage children. Joan eventually accepted Ray’s advance an agreed to go out with him. After a while, on January 22, 1999 Raygien and Joan became husband and wife and the family was complete. Raygien accepted Jesus as his Lord and was saved. He attended Promise Tabernacle Baptist Church. He participated with the Men’s Ministry and was a supporter of the church. Raygien was an avid reader and he enjoyed socializing with this friends and family. He will be dearly missed. On Wednesday, April 22, 2022 at the age of 81, Raygien Adams entered into sweet rest with his Lord Jesus Christ. Mr. Raygien Adams leaves in God’s care and to cherish his memory: loving and devoted wife, Joan; step-son, Trabien Powell, both of Flint; step-daughter, Tiffany (Clyde) Childress; grandchildren, Marcus Ballard and Makai Childress, all of Nashville, TN, Le’Traia, Treasure and Trenton Powell, all of Columbia, TN; great-grandchild that he adored, Malia Ballard of Nashville, TN; sisters-in-law, Diane (Clyde) Bradshaw of Grambling, LA, Vivian (Clinton) Jenkins of Flint, Beverly (Jimmy) McCollister of Houston, TX, Stephanie (Joe) White of Dubach, LA and Felecia Adams of Cleveland, OH; brothers-in-law, William (Autric) Powell, Davie (Lula) Powell, all of Dubach, LA, and Ralph (Barbara) Powell of Grand Rapids, MI; a host of nieces, nephews, cousins, other relatives and friends including special friends, Joan “JoJo” Greenard, Faye Glover, Diane Poplar, Brenda Laney, James Rawls and Jack Pleasant. Raygien was preceded in death by his parents, William Temple and Roesther Aldridge-Adams; 4 brothers, Earnest, Richard, Thomas and Robert; and sister, Christine. The family would like to express special thanks to Bishop Frederick L. and Mrs. Donna Flowers and the Promise Tabernacle Baptist Church family, Catherine McLilly, Clinton Jenkins, Shonda Jenkins, Yaka Watson and Jeffrey and Angel Keyes.

The family of Mr. Raygien Adams created this Life Tributes page to make it easy to share your memories.

Send flowers to the Adams family.