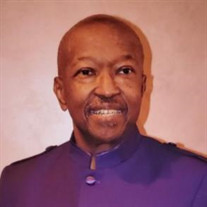 HYMAN, Mr. Randy Anthony - Age 65, passed away Monday, November 8, 2021 at his residence. Family hour 10:00 AM Friday, November 19, 2021 at New Creation Church of God, 3472 Lennon Rd., with funeral service commencing at 11:00 AM Pastor Carl Baker officiating. Interment Sunset Hills Cemetery, G-4413 Flushing Rd. Friends and pallbearers will assemble at the church 10:00 AM Friday. Mr. Hyman will lie in state in the Chapel of Lawrence E. Moon Funeral Home, 906 W. Flint Park Blvd., and may be viewed from 12:00 PM - 6:00 PM Thursday. Randy Anthony Hyman of Suffolk, Virginia was born October 8, 1956 to the late Henry and Elizabeth Hyman. He was the youngest of six children and was preceded in death, by his brother, Wilson Hyman, and his sister, Priscilla Hyman Beamon Benn (Wesley). Randy is survived by his sisters, Elois Wingfield (Maurice), Phyllis Hyman, and his brother, Carver Hyman; and devoted uncle, Philmore Artis; nieces, Antoinette Hyman-Harris (Everton), Monica Wingfield, Marcia Wingfield Hill (James), Lauren Brookins, Leslie Jones (Curtis); nephews, Andre Hyman (Mable), Alvin Beamon, Eric Hyman (Venise), Lester Beamon, Jarryd Brookins, and a host of great nieces and nephews. Randy was baptized at an early age at Oak Grove Baptist Church in Suffolk and remained a member there until completing college. He became a devoted member of the New Creation Church of God where he remained until his transition from this life. Randy graduated from John F. Kennedy High School and attended Virginia State College in Petersburg, VA. He received a Bachelor of Science Degree in Engineering and a Master’s Degree in Engineering from Central Michigan University. Randy worked for General Motors in Flint, Michigan until he retired. While working at GM, he met and married Linda Thaggard. Randy was a loving and devoted husband. Though Randy and Linda never had children of their own, he touched the lives of many children from both of their families as well as children from their GM and church family. Randy also gained an extended family, mother-in-law, Nettie M. West (Cleavland), father-in-law, John William Thaggard (Christine); 3 loving sister-n-laws, Doretha Berry, Yvonne Miles (Kevin), and 2 brothers-in-law, Dannie A. Thaggard (Frankei), Anthony Berry; nieces Natalie G. Agnew (Christian), Nathan A. Berry, Nia S. Berry, Jenae` E. Garcia (Daniel), Jeanette A. Jones, Jacquelyn R. Miles, Danny A. Thaggard Jr. (Tammy), Quincy Thaggard, Allecia Thaggard and a host of great nieces and nephews; and good friends, Donald Roots, Allen Battle, Allen Gilbert, Ellsworth Jackson, Earl and Betty Gilchreast, David and Crystal Arrowood, and countless others. After graduating from Virginia State University, Randy worked for GM for over 35 years. Randy loved his work and often spoke of his work with GM 3800 engines and quality controls. His work allowed him to travel, and, in those travels, Randy dedicated much of his time at General Motors to recruiting African American students to work for GM. He was a stickler for fairness and wouldn’t allow anyone to be mistreated. Randy loved his family and there was nothing that he wouldn’t do for his family and Friends. He and Linda loved to travel so he would not hesitate to jump on a plane to support family wherever they may be. Randy was a cheerleader for Christ. He spent much of his time making sure that his friends and family knew Christ.

The family of Mr. Randy Anthony Hyman created this Life Tributes page to make it easy to share your memories.

Send flowers to the Hyman family.