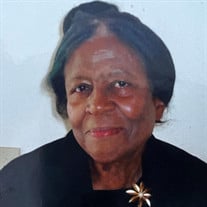 HOWARD, Pastor Emeritus Marcella L. - Age 100, passed away Wednesday, January 26, 2022, at Argentine Care Center in Linden, MI. Family hour 10:00 AM, Saturday, February 5, 2022, at Southeast Christian Church, 4171 Lapeer Rd., Burton, MI, with funeral service commencing at 11:00 AM, Pastor Kenneth Brown, officiating. Interment River Rest Cemetery, G-4413 Flushing Rd. Friends and pallbearers will assemble at the church 10:00 AM Saturday. Pastor Emeritus Howard will lie in state in the Chapel of Lawrence E. Moon Funeral Home, 906 W. Flint Park Blvd. Public Viewing will be held only during the family hour Saturday.Marcella Lee was a Gift from God to her parents, Elder Artie Clay Smyers and Mother Irene Smyers on November 2, 1921 in Sue City, Iowa. The family relocated to Flint, Michigan soon thereafter where Marcella received her formal education. Marcella received her early Christian Training as a child raised up and nurtured in the “Church of God In Christ”, where her father and her uncle were both ordained pastors. Marcella was saved and received the Holy Ghost under her father’s pastorate. Marcella served in a number of basic Christian learning positions in her father’s assembly: Sunday School Secretary, Church Secretary, Praise Leader, Sunday School Teacher, YPWW (Young People’s Willing Workers), Etc. Her Christian Education and Development was further enhanced under the tutelage of such worthy individuals of the faith at that time in this organization. Bishop S. C. Cole, Elder James Markham, Elder Leo Jackson and others. Marcella was further blessed indirectly because of our Father’s friendship over the years with the late Bishop Samuel N. Hancock (PAW), of Detroit, Michigan. This was her initial knowledge of the “Oneness” Doctrine. She did not fully understand it at that time but the seed was planted and took root. Soon after the death of our father, Marcella relocated to the state of California. She visited many churches and was under the watch care of many great pastors and bishops. She received her ministerial license with the PAW in 1974. Her Christian education was advanced. Marcella moved back to Flint, MI to care for her mother who had suffered a stroke. She took membership at Bethlehem Temple Church pastored by Bishop B. T. Scott. She was a faithful member at Bethlehem Temple. Her later Christian service is inclusive of but not limited to missionary work. She was blessed to minister to the needs of the sick and infirm in homes, hospitals and churches. She did Christian counseling and later accepted her call to the Evangelistic Field.Marcella was privileged to see souls saved, reclaimed and baptized in Jesus Name. While on the field Marcella learned many foundational truths from many great sources. She was blessed to attend many PAW conventions to hear men such as Bishop R. P. Paddock, J. S. Holly, Freeman M. Thomas, William Crossley, F. L. Smith, B.T Scott, James Johnson. Men that paved the way for us to this day. God blessed Marcella Howard to live an entire generation, BUT before GOD, called her Home He gave her one last assignment: Marcella Howard accepted the call to the pastorate in 1988 and was blessed to establish ALPHA AND OMEGE APOSTOLIC CHURCH OF THE LORD JESUS CHRIST in February, 1989. She received the blessings of the late Dist. Elder Scott, her Pastor and the assistant Pastor at that time: District Elder John A Brown. Her 1st charter member was her husband Deacon Wendell B. Howard. (Marcella lost her husband and best friend of over 23 years June 7, 1999). Marcella’s aim in life remained the same. It was not money, fame attention—but she lived to please God. She believed like the late great: Dr. Martin Luther King, Jr. “If I can help somebody as I pass along, If I can cheer somebody with a word or song, If I can show somebody He’s traveling wrong – THEN MY LIVING HAS NOT BEEN IN VAIN.” MARCELLA LEE HOWARD’S LIVING WAS NOT IN VAIN! Marcella Lee Howard leaves to cherish her memory: one sister, Beverly Hill of CO., one brother, David Smyers of CA. Two sisters-in-law, Sis. Katie Smyers of Michigan, Sis. Mamie Smyers of CA. Two beloved special nieces: Sis. Lynn Spears of Michigan & Sis. Deborah Smyers of CO. special nephews: Bro Daniel Hill of CO, Bro. Bobby LeFlore of MI. Numerous other beloved Nieces, Nephews, Cousins, Brothers and Sisters in the Lord, Special Friends Pastor Annie Ferguson, & Dr. Elizabeth Nichols, Zion Temple Church Denver, CO. and all of you that helped her, gave her a kind word, or a loving handshake. NOW! Marcella is rejoicing in heaven with Deacon Howard, her mother and father, brothers & sisters that went before her: Eld. Artie & Mother Irene: Sisters: Ollie, Coradah, Constance, Brothers: John, Paul, Albert, Archie, James & Bernard.

The family of Pastor Emeritus Marcella Lee Howard created this Life Tributes page to make it easy to share your memories.