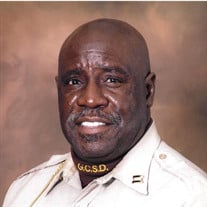 JACKSON, Mr. Owen Jr. Walker, - Age 70, passed away Wednesday, May 5, 2021 at his residence. Family hour 10:00 AM Friday, May 14, 2021 at New Heaven Missionary Baptist Church, G-3184 W. Pierson Rd., with funeral service commencing at 11:00 AM Pastor Joseph Jenkins, officiating. Interment Great Lakes National Cemetery, G-4200 Belford Rd., Holly, MI. Friends and pallbearers will assemble at the church 10:00 AM Friday. Mr. Jackson will lie in state in the Chapel of Lawrence E. Moon Funeral Home, 906 W. Flint Park Blvd., and may be viewed from 12:00 PM - 6:00 PM Thursday. Owen Walker Jackson, Jr. was born February 4, 1951 to Owen Walker Jackson, Sr. and Mary M Jackson. He departed this life to be with our Lord and Savior May 5, 2021. Owen lived in Flint his entire life. He attended and graduated from Emerson Junior High and Flint Northern High Schools where he played football and ran track and later ran track for Mott Community College. Owen proudly served our country as a Sergeant in the United States Army. He "briefly" worked for General Motors but later realized his talents were better served with AT&T. He began working at AT&T as a janitor and retired as a Service Technician after 36 years of employment, retiring in 2009. Any task Owen took on was well done. He was a devoted family man who took pride in being a provider. Owen was firm but fair. No meant no but yes was definitely YES. At a young age, he accepted Christ as his personal Lord and Savior and went to church regularly. He joined the New Heaven Missionary Baptist Church in 2000 and began walking in his calling as part of the church’s Security in Ministry team as well as a Van Driver and Amor Bearer at the pleasure of the late Pastor Fred S White. He spent many hours at New Heaven filling in and assisting wherever he was needed which included keeping the church grounds cleaned, mowing the grass and keeping the church in order.  Mostly everyone who met Owen saw the glory of God and were drawn to him. When asked to help in any area, his response was "NO PROBLEM". First Lady Twinett named him Prince and his loving wife Princess because of their dedication to their church family. To say that Owen will be missed is truly an understatement. To say there will not be a void in our lives, is a lie. To say he left a legacy of love, hope and faith is the absolute truth! Owen leaves to cherish his memory: his loving and faithful wife 20 years Jean (Annie) Jackson; 2 sons, Owen Walker (Valerie) Jackson III of Valley, AL, Jeffrey (Kendra) Osborn of Flint, MI; daughter, LaTeka L Osborn of Flint; 4 step children, Yolanda Ivy and Patrick Ivy both of Houston, MS, Lashawnda Gray and Talisa Gray both Las Vegas, NV; 5 grandchildren; step mother, Gladys Jackson of Flint; 3 sisters, Arlene Jackson of Round Rock, TX, Valerie Jackson, Lynnwood, WA and Kimberly Richardson of Flint; 4 nieces, Kimil Wiggins, Bianca Wells, Breiyah Richardson and Brei’Shawna Richardson all of Flint; 2 nephews, Kevin Jackson of Round Rock, TX and Jade Wiggins of Kokomo, IN; 1 uncle, Robert (Bob) Jackson of Flint, mother-in-law, Ola Calvert of Mantee, MS, sister-in-law, Brenda (Tyree) Summers of Flint, brother-in-law, Ellis Calvert of Flushing, MI and many other relatives and friends including bonus daughter Takesha Osborn and bonus grandchildren and great grandchildren. An extra special thanks to his wife Jean who lovingly and tirelessly honored her wedding vows that she took before God and man, by caring for and honoring him unselfishly. They had been together for a total of 36 years and were a model couple for generations to come. Those who preceded Owen to glory were mother, Mary M Jackson; father, Owen Walker Jackson, Sr.; sisters, Debra A Jackson and Angela M Wiggins; grandparents Walker Jackson and Mildred Jackson; aunts Betty Grier, Marlene Jackson and Mattie Lee Malone. Special thanks to Pastor Joseph and First Lady Twinett Jenkins and the New Heaven MBC family, prayer warrior and confidante Mother Eunice Ingram, special friends and breakfast club buddies, Gary Payne, Wiley Stocker, Donald (Butch) Stewart and Ollie (OC) Lathon, hospice nurse Michelle Boehm, home health aide Ashley Aldridge both of McLaren Hospice of Flint. We miss you Husband, Father, Brother, Uncle, Friend and “Poppie”.

The family of Mr. Owen Walker Jackson Jr. created this Life Tributes page to make it easy to share your memories.