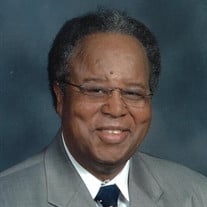 WILLIAMS, Deacon Otis - Age 83, passed away Tuesday, May 25, 2021 at his residence. Family hour 10:00 AM Saturday, June 5, 2021 at Grace Emmanuel Baptist Church, 3502 Lapper Rd., with funeral service commencing at 11:00 AM, Pastor Rabon Turner, officiating. Interment Great Lakes National Cemetery, G-4200 Belford Rd., Holly, MI. Friends and pallbearers will assemble at the Church 10:00 AM Saturday. Deacon Williams will lie in state in the Chapel of Lawrence E. Moon Funeral Home, 906 W. Flint Park Blvd., and may be viewed from 12:00 PM-6:00 PM Friday, with family present from 4:00 PM-6:00 PM to receive friends. Deacon Williams was Honorably Discharged from the United States Army.Mr. Otis Akeen Williams was born July 17, 1937 in Livingston, Alabama, the son of Monroe and Lula Williams. Otis served in the United States Army from 1960 to 1962 . While in the Army he became a Number 1 Sharp Shooter which he has several medals. He moved to Flint, Michigan in 1954, along with his mother and sister, Sadie. Otis graduated from Flint Central High School, “Class of 1957.” He married Sandra Simmons on July 15, 1972. Otis and Sandra had 2 wonderful children, Otis M. and Rochelle. He simultaneously worked full time for General Motors Corporation and went full time to Barber College in Detroit, MI. He also earned a Beautician License along with a Certificate in Electrolysis. Otis loved learning new things. He took wood carving classes at Institute of Art and carved a statue of his nephew, Reggie Williams. Otis also took sewing lessons and made a handsome shirt. His motto was “Men/Women can do many things if you just set your mind on getting it done and done right. He loved gardening until his health prevented him from doing so. The first two or three rolls of planting a garden he would say “this is for the thieves.” Otis enjoyed being a Deacon and would fill in wherever needed at church. He enjoyed hospitality because this gave him a chance to chat with people coming to Grace Emmanuel Baptist Church. Otis sang in the Senior Choir and Men’s Chorus. He retired from AC Spark Plug, a division of General Motors Corporation in 1996 and from Barbering in 2019. Otis was featured in the Flint Journal 2 times showing his talent in designs in haircuts. He received a Salute to African American Men of Achievement Award in 1996. Otis enjoyed all sports; if a ball was involved he would watch it. He was a founding member of First Class Travel Club. Otis loved traveling and every year he wanted to explore more of God’s earth. He was a counselor, teacher, friend to many. Otis showed our family how to love and forgive no matter what the circumstances were. He loved his wife, children, grandchildren and his great-grandchild. Most of all he loved Jesus with all his heart. Mr. Otis Akeen Williams leaves to cherish his memory: wife, Sandra Rae (Simmons) Williams; son, Otis Monroe Williams; 2 grandchildren, Deonte A. Williams and Chantel M. Williams; great-granddaughter, Lakayla A. Williams, all of Flint; sister, Sadie Williams of Grand Blanc, MI; a host of nieces, nephews, other relatives and friends. Mr. Williams was preceded in death by his daughter, Rochelle Williams-Fadairo; parents, Monroe and Lula Williams; sisters, Viola McIntyre, Lucinda Bowers, Ella Benefield, Maeola Buford and Mamie Arburtha; brothers, Elijah, Adolph, Willie and Monroe. The family would like to express special thanks to Pastor Rabon L. Turner Sr. and Grace Emmanuel Baptist Church family, Jewel Brown, Terry Turner, Henry Robinson, Ella Twilly, Ralph Cleveland, James Parker, Joe Bell, Judy Samuels Thornton, Kim Buckner, Nathaniel Perry, Julia Williams, Sadie and Moses Williams.

The family of Deacon Otis Williams created this Life Tributes page to make it easy to share your memories.