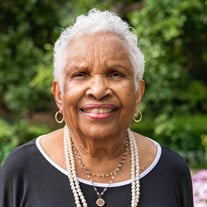 DAWSON, Mrs. Mona Sue Evelyn - Age 94, passed away Sunday, December 12, 2021 at her residence. Family hour 10:00 AM Tuesday, December 21, 2021 at Christ The King Church, 1811 Seymour St., with a memorial mass commencing at 11:00 AM Father Paul Donnelly, officiating. Family and friends will assemble at the church 10:00 AM Tuesday. There will be no public viewing. There will be a Memorial Reception from 5:00 PM - 8:30 PM Monday, 12/20/2021 at The Eberson, 130 E. 2nd Street, Flint, MI 48502. Mona Sue Dawson (Young), also affectionately known as Evelyn, was born on July 27, 1927, to Angeline Ventress-Young and William Young in New Orleans, Louisiana. She was the youngest of seven siblings: Leora LaFord, Viola LaFord, Addie Margaret Young (Barber), Bernice Rebecca Young (Smith-Jenkins), and two brothers. She attended both Martinsville Training School and Albert Harris High School in Martinsville, Virginia, for elementary and secondary school. In 1950, Mona graduated from the illustrious North Carolina Agricultural and Technical State University in Greensboro, North Carolina (A&T), earning a Bachelor of Science in Commercial Education. At A&T, Mona was a member of Alpha Kappa Alpha Sorority, the Newman Club, and was an officer for the National Panhellenic Council. Upon graduation, Mona married her college sweetheart, Henry P. Dawson, on June 9, 1950, at her family home in Martinsville, Virginia. They soon moved to Flint, Michigan, to begin their lives together. Mona began her career in education, as a business education instructor, within the Flint Community School district. Many students recall her typing courses. She then became an elementary teacher, where she taught at Stevenson and later, Manley Elementary Schools. In 1972, Mona earned her Master’s Degree from Eastern Michigan University. Upon completion of her graduate degree, she accepted a position to work in the teacher’s magnet program at Manley. It was the first all-day kindergarten. Mona ended her career at Manley. She educated the youth of Flint for over 30 years, retiring in 1986, at the age of 59. Mona was an active member of the Flint community. She served in many ways, including acting as a founding member of the Zeta Beta Omega graduate chapter of Alpha Kappa Alpha, serving on the Board of Directors for Ovations (Flint Symphony), a being a member of Valley Voyagers, and Christ The King Catholic Church helping to run the kitchen and serving as a booster for youth programming. Mona was a loving mother, grandmother, sister, daughter, aunt, and friend. She leaves a strong legacy of service in her memory by her children: Angie Lavern, Sabina Denise, Bridgette Marie, René LaFord (Traci), and Wallace Jerome (Aubrey); special son, Sidney Wallace (Pauline); sister, Elsie Fontenot; grandchildren: Derrice (Necol), Damon, Monica (Rodrick), Keysa, Gia, Aryn, Deandre, Amber, Alexandria, Olivia, and Jalen; great-grandchildren: Zakai, Journi, Johnathan, Jerome, Maki, Royal, Hope, and Noah; and a host of nieces, nephews, cousins and friends. Mona S. Dawson is preceded in death by her beloved husband, Henry Pleasant Dawson, III; son, Henry Pleasant Dawson, IV; siblings and parents, who will all greet her in heaven. Live service can be viewed at: https://youtu.be/hU5mFziy5f8

The family of Mrs. Mona Sue Evelyn Dawson created this Life Tributes page to make it easy to share your memories.

Send flowers to the Dawson family.