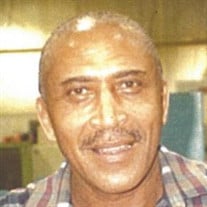 Huddleston, Mr. Melvin - Age 78, passed away Monday, August 9, 2021 at his residence. Family hour 1:30 PM Tuesday, August 17, 2021 from the Chapel of Lawrence E. Moon Funeral Home, 906 W. Flint Park Blvd., with funeral service commencing at 2:00 PM, Pastor Kenneth L. Stewart, officiating. Interment Flint Memorial Park Cemetery, G-9506 N. Dort Hwy. Friends and pallbearers will assemble at funeral home 1:30 PM Tuesday. Mr. Huddleston will lie in state in the Chapel of Lawrence E. Moon Funeral Home and may be viewed from 12:00 PM-6:00 PM Monday. Melvin Huddleston passed away peacefully in his home on August 9, 2021. Mr. Melvin Huddleston was born December 26, 1942 in Big Creek, Mississippi, the son of Maryland Huddleston and Lula (Stricklin) Huddleston. He graduated from Chickasaw County High School in Houston, MS in 1960 and moved to Flint, Michigan in December of the same year. His last employer was Hougen Manufacturing, Inc. where he worked from 1972-2014 as a CNC Operator. Melvin was known as “JR” at work and held the esteemed title as the only employee with the longevity of over 40 years with Hougen Manufacturing, Inc. He was honored with an Employee Appreciation Day for his loyalty to the company. Melvin was married twice to, Margaret Louise Rayford in January of 1969 and to Hortensia Jones in August of 1977. He enjoyed helping people and would frequently offer transportation to others that may not have had an automobile. Melvin loved his mother dearly and would visit her daily. They enjoyed some common interests, including playing the lottery and philosophical conversation. He loved country music and all of his sisters acquired the taste for country music as a result of his influence. He was loved by all that knew him. Mr. Melvin Huddleston leaves to cherish his memory: 6 sisters, beloved sister and caregiver, Gwendolyn Cooper of Flint, Peggy (Larry) Taylor of Moscow Mills, MO, Gloria Huddleston of Columbia, MD, Sylvia Jibson of Dyers, IN, Elmira (Jessie) Collins of Flint and Naomi Alexander of Charlotte, NC; a host of nieces and nephews; many cousins; 3 sisters-in-law, Albertina Huddleston of Baton Rouge, LA, Kim Kern of Vassar, MI and Michele Huddleston; brother-in-law, JB Alexander, both of Flint; a host of other relatives and friends including special friends, 3 children that Mr. Huddleston loved as his own, Marisa and Martez Kemp, and Lidell White. Mr. Huddleston was in preceded death by his daughter, Patricia Huddleston; ex-wife, Hortensia Jones; parents, Maryland Huddleston and Lula Herndon; step-father, Joseph Herndon; fraternal grandparents, Tom and Jenett Huddleston; maternal grandparents, King David and Victoria Strickland; 4 brothers, Carl Huddleston, Claude H. Huddleston Sr., Rufus Huddleston and C.C. Huddleston; sister, Bessie Mae Raven and Erie Mae Butler; aunt, Chester Mae Nicholson; 3 nephews, Bennie James Cooper, Claude Jamal Huddleston and Torrance Huddleston. The family would like to express special thanks to Compassus Hospice Team of Grand Blanc, MI. The family would also like to extend special appreciation to Annie Perteet, Bernace Fleming and Denise Townsend for their thoughtfulness and assistant to Mr. Huddleston in his time of need.

The family of Mr Melvin Huddleston created this Life Tributes page to make it easy to share your memories.

Send flowers to the Huddleston family.