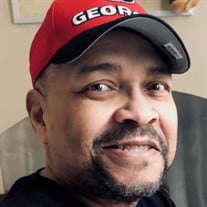 EDWARDS. Mr. Mark - Age 57, passed away Friday, August 20, 2021 at Kith Haven Nursing Home. Mark Anthony Edwards, a loving Father and a friend of many passed away unexpectedly at the age of 58 on August 20, 2021. Mark is survived by his Mother and siblings, and his children , Mark Anthony Edwards Jr., Marquita Antoinette Edwards, Ryan Lee Edwards, Bishop Maco Edwards, Grace Melenbrink, and Sabrina Edwards, his step children; Scott Anthony Logan, Michael Christian Logan, and his first wife Kimberley Edwards. Mark was the first born son to Hattie Ree Edwards and Bobby Lee Edwards on a special day, December 24, 1963. Mark was a very talented writer, and artist. He graduated from high school in 1986, and joined the United States Navy making him the first of the family to travel the world. In 1987, Mark met who he made known until his last breath, the love of his life, his wife, Kimberley Edwards while stationed on USS Anchorage Long Beach , CA. They got married February 12, 1988. They went on to start, and raise a family together , and remained married for 12 years. Their favorite thing to do then was ride around Los Angeles , head to the beach for some fun under the sun, and go to the park and chase their 5 children around. Being with family was his pride. He enjoyed playing “aliens” around the house with us kids. It was a silly game he made up where the house was pitch black, and we had glow sticks, and he would chase us around. It was scary but we all loved the thrill and we would all go to bed afterwards. He was a fun dad , and formed a bond between all of his children. In- n -out burger was the most requested burger, but his favorite was a home cooked meal. He was a dedicated father and husband. The true definition of a family man. Mark was a very talented writer. He wrote poetry and children’s books. He was a talented drawer and painter. He enjoyed watching Bob Ross and watched him very often. He loved his Marvel Comics and had a collection like no one had ever seen! He enjoyed playing video games, Sci Fi movies, watching NFL games, and eating good food. He would always say “that’s some good eatin there”! Mark was a God fearing Christian man, who studied his bible faithfully and he loved the Lord. He would wake up early morning Sundays faithfully to watch his favorite, Dr. Charles Stanley. We aren’t sure that he ever missed a Sunday episode. He spoke from his heart like John the Baptist, and was known to be fearless. Mark Anthony Edwards is preceded in death by his father , Bobby Lee Edwards.

EDWARDS. Mr. Mark - Age 57, passed away Friday, August 20, 2021 at Kith Haven Nursing Home. Mark Anthony Edwards, a loving Father and a friend of many passed away unexpectedly at the age of 58 on August 20, 2021. Mark is survived by his Mother... View Obituary & Service Information

The family of Mr. Mark Edwards created this Life Tributes page to make it easy to share your memories.

Send flowers to the Edwards family.