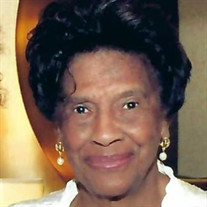 MUSE, Mrs. Margaret Delores - Age 83, passed away Monday, January 31, 2022, in Ingham County, Michigan. Family hour 10:30 AM Thursday, February 10, 2022, at Word of Life Christian Church, 460 W. Atherton Rd., with funeral service commencing at 11:00 AM Pastor George Wilkinson, officiating. Interment River Rest Cemetery, G-4413 Flushing Rd. Friends and pallbearers will assemble at the church 10:30 AM Thursday. Mrs. Muse will lie in state in the Chapel of Lawrence E. Moon Funeral Home, 906 W. Flint Park Blvd., and may be viewed from 12:00 PM - 6:00 PM Wednesday. Margaret Delores “Darshe” Muse was born March 5, 1938 in Memphis, TN. The daughter of Len & Roberta Flynn, Sr. Margaret accepted Christ at an early age and was baptized at Beulah Baptist Church, Memphis, Tennessee under the Reverend A.F.D. Dixon. She later graduated from Melrose High School class of 1956 where she was a member of the Charmettes Club and Girl Scouts. On April 26, 1957, she married U.T. Muse, Jr. and to this union, four children (Darrell, Ula Thomas “Pumpkin”, Sharon “Neise” and Tanya “Honey”) were born. Margaret became a long term resident of Flint, Michigan where she was a homemaker and spent many hours at her children’s school volunteering in the classroom and performing lunch room duties. She became a member of Foss Avenue Baptist Church, under the late Reverend Dr. Avery Aldridge. She loved attending Sunday school and made sure her children attended faithfully. Margaret was a quiet, funny, sweet but also stern woman who would do anything for her family. Her children and grandchildren were her life. She enjoyed being there whenever one of them needed her and played an intricate role in raising her grandchildren and spending time with her great grandchildren. As Margaret’s health started to decline she relocated to Haslett, Michigan to live with her daughter and son-in-law. While there she always made it clear, that she was still a “grown woman” and you couldn’t tell her what to do. Margaret was small in stature but mighty in strength. By the grace of God she made it through many health challenges even when the doctor’s began to count her out. Margaret knew it wasn’t her time until God called her home and until that time she was going to continue to fight. On January 31, 2022 her fight was over and God called her home to rest. She leaves to cherish her memory, son, Ula Thomas Muse, Grand Rapids, MI, daughter, Tanya (Ervin) Pratt, Haslett, Michigan, Grandchildren, Diogenes Cleveland-Muse, Darnell Holliday, Flint, MI, Mercedes Kemp, Desha Kemp and Thomeshia Muse, Grand Rapids, MI, Dominique Muse, East Lansing, MI, Bianca Pratt, Augusta, GA and Grailyn Pratt, Houston, TX., 8 great grandchildren, nieces, Sephia (Otha) West, Damita Flynn-Byers, Courtney (Corey) Coley, nephews, Tyler (Lillian) Glover, Reginald Glover and Eric Flynn a host of other relatives and friends including special friend Barbara B. Bracey. Margaret was preceded in death by: parents, Len & Roberta Flynn, Sr., daughter, Sharon Muse, son, Darrell Muse, daughter-in-law, LaShawn Muse, sister and brother-in-law, Virginia & Tyler Glover, brother and sister-in-law, John & Verna Flynn, brother, Len Flynn and sister Louise Thomas. The family would like to express special thanks to Ingham County Medical Care Facility, Okemos, MI and Word of Life Christian Church, Flint, MI.

The family of Mrs. Margaret Delores Muse created this Life Tributes page to make it easy to share your memories.

Send flowers to the Muse family.