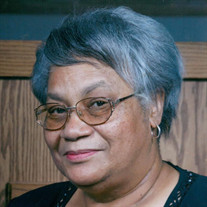 WALLACE, Mrs. Mamie Louise - Age 79, passed away Monday, July 26, 2021 at Garden City Hospital in Garden City, MI. Family hour 10:00 AM Wednesday, August 4, 2021 at Grace Emmanuel Baptist Church, 3502 Lapeer Rd., with funeral service commencing at 11:00 AM Pastor Ronald Wilson officiating. Dr. Rabon Turner Host Pastor. Interment Sunset Hills Cemetery, G-4413 Flushing Rd. Friends and pallbearers will assemble at the church 10:00 AM Wednesday. Mrs. Wallace will lie in state in the Chapel of Lawrence E. Moon Funeral Home, 906 W. Flint Park Blvd., and may be viewed from 12:00 PM - 6:00 PM Tuesday. After a life built on a foundation of service to God and an unyielding love for her family, Mamie Louise Wallace was called home to be with the Lord early on the morning of July 26, 2021. Mamie was born on June 22, 1942 in Enfield, NC to Lee and Geneva (Evans) Wright, she accepted Jesus Christ as her Lord and Savior at a young age at Ivory Hill Baptist Church. She was the youngest girl of 13 siblings, with 7 brothers and 5 sisters. Mamie enjoyed reading and school, graduating from Eastman High School in 1960. After graduation, Mamie worked in White Oak School as a secretary. Mamie then moved to Flint, MI along with her brothers in the mid-1960’s and promptly joined Mt. Olive Baptist Church. She continued to serve in several capacities at the church for more than fifty years. She married Alfred Wallace in December of 1967. Mamie and “Big Al'' had two sons, Al Jr. in 1973, and Roderick in 1977. During the 1980’s, Mamie worked for Hamady Brothers Grocery Store, actively participating as a union delegate and team leader in the grocery business. She also worked for Chase Bank for several years, building relationships with customers daily. Mrs. Wallace was also an active fixture in the education of her boys, participating as a volunteer at their schools and helping them to get engaged in programs in the evenings and on the weekends. She worked hard for her sons to attend college and also attended Mott Community College and Detroit College of Business herself. Mamie loved to create floral arrangements with her sisters-in-law Vernice and Helen, and helped to start a business, Wrights Originals, in 1986. Upon Alfred’s retirement in 1996 from General Motors for health reasons, Mamie took care of him closely until his passing in 2017. While caring for her husband, she enjoyed volunteering at elementary schools on the south side of Flint, assisting students in learning how to read. After her husband’s death, she moved to the suburbs of Detroit to be with her sons and her grandchildren. Mamie encountered several health trials in the years after, yet remained faithful to Christ and loving to her family. Mamie leaves to cherish her memory: her sons, Al (Tamiko) Wallace of Redford, MI, Roderick (Michele) Wallace of Farmington Hills, MI; grandchildren, Marc Hester-Wallace of Redford, MI, Christian Wallace of Redford, MI, Isabella Wallace of Redford, MI, Julian Wallace of Farmington Hills, MI, and Mia Wallace of Farmington Hills, MI, siblings, Hazel Mathis of Flint, MI, Elma “Sis” (Turner) Gray of Arlington, VA, Joe (Vernice) Wright of Flint, MI, and Bernard (Sadie) Wright of Flint, MI; sister in-law, Rene Wright; a dedicated church family at Mt. Olive, and a host of nieces, nephews, friends, and neighbors. Mrs. Wallace was preceded in death by her husband, Alfred Wallace Sr., her parents, Lee and Geneva Wright, her father-in-law and mother-in-law, Ernest & Hazel Wallace, her brothers, John Wright, Leo Wright, Charles Wright, William Wright, and Moses Wright, and sisters, Larine Wright, Mary Ethel Wright, and Vera Wright.

The family of Mrs. Mamie Louise Wallace created this Life Tributes page to make it easy to share your memories.

Send flowers to the Wallace family.