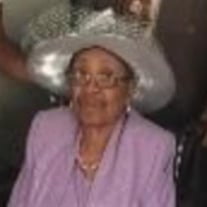 HARTFIELD, M C Lavinia- Age 99, passed away Sunday, May 29, 2022, at her residence. Mrs. Hartfield will lie in state at Macedonia Missionary Baptist Church, G-5443 N. Saginaw St. and may be viewed Monday, June 13, 2022, from 11:00 AM to 2:00 PM Interment Great Lakes National Cemetery, G-4200 Belford Rd., Holly, MI. To view services please click on link below: https://youtube.com/channel/UCM4VI3gzDL9c9SzIY7W9Adg MC Lavinia Hartfield was born on January 6, 1923, in Risen, Arkansas to the late Rev. Ira and Elnora Watkins. The family moved to Flint, MI in 1928 where MC Lavinia departed this earth, at home, on May 29, 2022. MC Lavinia married Freeman Busby(deceased) and had three children: LaWanda (deceased), Jerone, and Eleanor. In 1954 she married Turner S. Hartfield (deceased), a union that lasted 66 wonderful years. She leaves 2 children, Jerone (Tampa, FL) and Eleanor; 4 grandchildren (Michelle, Jaison (LaVonna), Melvin, and Allen (Sylvia); 4 great-grandchildren J’nai, Jaiden, Dailia, Davon, Ryan, A.J., Sheri; and 1 great-great-grandchild Marley. She also leaves 3 sisters-in-law (Lois and Verniece Watkins and Rose Hartfield. There are many nieces, nephews, and cousins in the Watkins, Williams, Cox, Young, and Hartfield families. MC Lavinia was the last of the seven Watkins children to take their flight from this earth: Ivory, Christeen, Larry, Jay, Leion, Sylvester, and MC. MC is the last of the 7 Watkins sisters and brothers who began their traditional Watkins Christmas Day Breakfast over 80 years ago. MC Lavinia attended Flint schools, including Northern High School and Mott Junior College. As a child, she sang and played the piano with her mother throughout the city. Later she sang solos throughout the state and on a national level with the International Free and Accepted Modern Masons and Order of Eastern Star, including the Bahamas Islands and Puerto Rico. MC Lavinia’s parents kept her involved in the work of the church that continued throughout her life. Her 89-year service at Macedonia Church has included Director of the general broadcast and Chairperson of the broadcast committee, General music director of the Church music department, Director of the Melody Choir, Assistant Director of the Senior Choir, member of the Inspirational Voices Choir, General church school secretary and Worship leader, Chairperson of annual Women’s Day services, General chairperson of the Entering Day Service of the new church edifices. MC Lavinia’s service extended beyond her local church: Member of the Urban League, NAACP, Great Lakes District Educational and Leadership Congress Choir, Registrar for the Congress for over 30 years, Dean’s office of the Wolverine State Congress, Coordinator of the Lucie E. Campbell Music Workshop of the National Baptist Congress and was an original member of the first workshop class held. MC Lavinia Hartfield was in the organization of the International F.&A.M Masons Order of Eastern Star. She was in the first Supreme Convention and was elected to be Supreme Recording Secretary holding that position for over 40 years, served as Grand Matron of the Edith Sampson Grand Chapter, Order of Eastern Star, and received many plaques and awards for outstanding achievements in growth and leadership, National District Grand Matron of the National Midwest District (7 States), Executive officer in the Exalted Degree Department of the Stars and the Sphinx Council of the Shrine Ladies, National Supreme Board member of International Mason’s and OES Supreme Board of Directors and the Recording Secretary of the International Masson’s Inc., Radio Station (FM 107.5) and Television station (WGPR) Board Directors. MC Lavinia Hartfield was elected International Woman of the Year by Zeta Phi Beta Sorority in 1975, along with many other community recognitions.

The family of Mrs. M.C. Lavinia Hartfield created this Life Tributes page to make it easy to share your memories.

Send flowers to the Hartfield family.