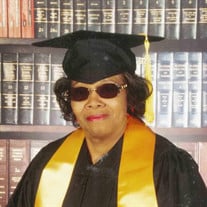 HOUSTON, Mrs. Luestle Ruth - Age 85 passed away Thursday, March 24, 2022, at her residence. Family hour 10:00 AM Saturday, April 2, 2022, at Family Worship Center, 3280 N. Linden Rd., with funeral service commencing at 11:00 AM. Interment Mt. Olivet Cemetery, 17100 Van Dyke Ave., Detroit, MI. Friends and pallbearers will assemble at the church 10:00 AM Saturday. Mrs. Houston will lie in state in the Chapel of Lawrence E. Moon Funeral Home, 906 W. Flint Park Blvd., and may be viewed from 12:00 PM - 6:00 PM Friday. Luestle Ruth Houston was born to the late William and Letha Souder of Nashville, Arkansas. She was born to praise and accepted Christ as her Savior many years ago. Her mother being a minister and a teacher instilled phenomenal ethics of what it was to be a true Christian and to love the Lord. She set out on her own to make it a priority to love, honor, and serve Christ as her personal Savior until the day They met face to face. She enjoyed her church until the end, Family Worship Center Church in Flint, Michigan. Her perfect occupation was to raise 3 children, Dennis, Sherry, and Lisa. She took great pride in being an example for them to follow. She attended Indiana University as a Nursing Major. She worked at Detroit Public Schools as a nurse. She also worked for Lothrop Homes as a Medical Coordinator. Later at 67 years old, she went back to college and graduated with honors, Summa Cum Laude earning a teaching degree and taught special education in the Detroit Public Schools. Her life was full of how she could guide others to Jesus. She passed out Daily Breads everywhere she went, Walmart, doctor’s office, homeless shelters, you name it, she was there passing them out, faithfully. She spread the word of Jesus loudly, and proudly. Hallelujah! She often said it was the highest praise for her King and Savior. She was musically inclined, piano, organ, guitar, tambourine, maracas, and many more. She sang throughout her life following her mother from church to church in Arkansas. Luestle continued to lift her voice for Christ in many choirs. You could hear her strong alto voice above many. Even to the end of her journey she sang her beautiful alto voice with her friend, Chaplain Bruce. Another of her greatest joys was to spend quality time with her grandchildren. She always had a van to tote them to the zoo, Belle Isle, (to feed the deer), most times before school. Luestle also hauled them to and from school daily, allowing their parents to complete their endeavors. She even chaperoned many events with her beloved grandchildren. Preceding her in death, father and mother, William and Letha Souder, late husband, James Houston, son Dennis Atwood, brother John Sr., sister in love, Rdean Souder. Rosalee Simmons, her cousin, who was raised as her sister. A heartfelt friend Mr. Edward Sanders. Luestle Ruth Houston leaves to cherish her memories, daughters, Sherry Reed, of Detroit, MI., Lisa (Leroy) Jackson, of Flint Twp. Brother, William (Shirley) Souder of Sherwood, AR. Grandchildren, Sherrelle Hudson, Aletha Jackson (Glenn Hicks), Carlos (Jazmin) Hudson, Mercedes Jackson (LaTasha Burton). Her GG’s, Terrell, Gabrielle, Aloni, Jerrell, Josh, Bryson, and Aria. Two stepchildren, Robert Houston and Glozine Barnes. She also leaves so many special nieces, nephews, cousins, family and loyal friends. Special thanks to Family Worship Center Church, Mark Holloway of Peace and Goodwill Baptist Church of Harper Woods, MI. McLaren Hospice Group, Andrew RN, Melissa CNA, Marie CNA, Sara SW, last but not least, Chaplain Bruce. Couldn’t have managed without any of you all. Thank you, sincerely.

The family of Mrs. Luestle Ruth Houston created this Life Tributes page to make it easy to share your memories.

Send flowers to the Houston family.