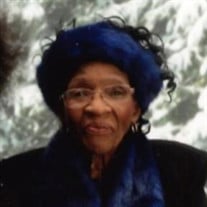 BEADY, Mrs. Lottie Mae - Age 92, passed away Sunday, November 14, 2021 at McLaren-Flint. Family hour 10:30 AM Wednesday, November 24, 2021 from the Chapel of Lawrence E. Moon Funeral Home, 906 W. Flint Park Blvd., with funeral service commencing at 11:00 AM. Interment Gracelawn Cemetery, 5710 N. Saginaw St. Friends and pallbearers will assemble at the funeral home 10:30 AM Wednesday. Mrs. Beady will lie in state in the Chapel of Lawrence E. Moon Funeral Home and may be viewed from 12:00 PM - 6:00 PM Tuesday. Lottie Mae (Jackson) Beady, affectionately referred to as Lottie Baby, Baba, and Aunt Lottie by either her friends, children, grandchildren, or nieces and nephews, was the second of eight children born to Tommie and Minnie Jackson on March 23rd, 1929, in Sparks, Georgia. She confessed her faith in Christ at an early age. For most of her young life, she was a member of Cottrell Chapel CME church of Sparks, GA. After moving to Flint, she joined Quinn Chapel AME church. She was a proud graduate of Cook County Training School, Adel, GA. The Lord blessed Lottie with a long and fruitful life. She was 92 when she passed away on November 14, 2021. She was preceded in death by her parents, her husband, her second son, Anthony Gregory, three brothers Sylvester (Buster), Hurley (Sonny), James Eddie, and two sisters Helen and Mercedes. At the age of 19, on July 12, 1947, she married the love of her life, her soldier boy, Charles H. Beady, Sr. He was 21. To that union, four children were born: (Dr.) Charles H. Beady, Jr., Ph.D., (Charles Jr.) Olivia Pricilla (Prissy), Rozeita Orlanda (Moochie), and Anthony Gregory (Tony). In the early 1950s, Charles Sr. heard, from friends who had moved north, of the news of great employment opportunity with the General Motors (GM) factory in Flint, Michigan. A few years after Charles and Lottie's marriage, his father Charlie (Cube as his friends called him), his hero, died unexpectedly at a relatively young age. With his father’s death as a factor and prompted by the news of potential employment with General Motors (GM), he left Lottie and the children in Sparks, with the promise that as soon as he found work and got settled in Flint, he would send for her, Charles Jr., Olivia, Rozeita and Anthony (Tony). Charles was able to find employment with the GM Chevrolet Factory in Flint. Tragically, while Charles was in Michigan, their youngest son, Anthony, passed away at the age of three. Charles drove from Michigan to Georgia for their toddler son's funeral, then back to Flint. Soon thereafter, he sent for Lottie and the three children. Reminiscent of Clifton Taulbert’s book, The Last Train North (1992), which reflects the migration of African Americans to jobs in the north and out of the Jim Crow south, Lottie’s oldest son, Dr. Charles H. Beady, Jr., a noted educator in his own right, has spoken, at various invited presentations, of the train ride from Georgia to Michigan. He remembers his mother’s protective and comforting presence on the train, the fried chicken and pound cake she prepared for the long trip, and the shock of experiencing Michigan’s cold and snow when his father met his mother, him and his sisters at the train station in Detroit, to drive them on to Flint. While Charles Sr. was the proverbial "breadwinner," Lottie Mae was the "rock" of the family. She loved her husband, and she loved her children, and she was always there for them. She worked from time to time as a domestic to help provide extra funds for her family. Supporting her husband and “raising her children in the way that they should go" was always her priority. Charles H Beady, Sr., passed away in 1988, a few years after retiring as a factory worker from the Chevrolet Division of General Motors. At that time, he and Lottie had been married for 40 years. Now, 33 years after his passing, they are reunited eternally. Lottie Mae, Lottie Baby, Aunt Lottie, Baba carries to rest with her the precious relationships she once enjoyed with friends and relatives who have passed on: Alonza (grandson), Ralph Jr., Mickey, Melaniace, Sapora (Ziffie), Wallace, Ms. Florence, Bonita, Ms. Essie (the originator of “Lottie Baby”), Mary Joyce, Mary Alice (Fruttie), and leaves living loved ones to cherish her memory: her three children; her daughter-in-law (Dr.) Helen (Charles), sisters, Marva, Flonell, Crecy; two brothers, Earl (Marva) and William (BJ); grandchildren: Anthony (April), Jennifer (Rico, Sr.), Cecilia, Willie (Calvin), Dewan (Natasha), Keith (Millicent); great-grandchildren: Roddrika, Rico, Jr.(Lottie always called him Brown Sugar), Alonza, Annette, Kerriey, Korriey, Deon, LaKai, Ah’Ney, Bailee, Grayson; nieces and nephews: Maria, Sandy, Wanda, Michelle (Earl), Gary (Paula), Tracey, Gail, Victor; many great-nieces and nephews and other relatives she loved and who loved her: Maria’s children, Cousin Bill and Dot’s family, Marva’s Charles and family, Lilly Mae (Tunnie), the Glenn family, Roy White (like a second son); Ms. Juanita, Mr. Jones, Gloria; Ms. Rena, Ms. Emma and all those we did not name as an error of the head but not the heart.

The family of Mrs. Lottie Mae Beady created this Life Tributes page to make it easy to share your memories.

Send flowers to the Beady family.