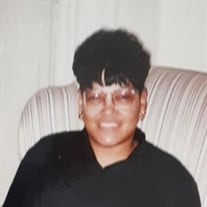 HANDLEY, Ms. Linda - Age 70, passed away Friday, March 25, 2022 at St. Joseph Mercy Oakland, Pontiac, MI. Family hour 10:00 AM Saturday, April 9, 2022 from the Chapel of Lawrence E. Moon Funeral Home, 906 W. Flint Park Blvd., with funeral service commencing at 11:00 AM, Pastor Christopher Taylor, officiating. Entombment Sunset Hills Mausoleum, G-4413 Flushing Rd. Friends and pallbearers will assemble at the funeral home 10:00 AM Saturday. Ms. Handley will lie in state in the Chapel of Lawrence E. Moon Funeral Home, and may be viewed from 12:00 PM-6:00 PM Friday. Ms. Linda Dianne Handley, the fifth of nine children was born to Densell and Rozene Handley on April 17, 1951, in Star City, Arkansas. As a young child Dianne was a loving sister and she would always be seen playing hours at a time with them. She was an exceptionally good skater and loved to play with her paper dolls. As Dianne grew older, she developed a passion for reading and became an avid movie fan. She accepted Christ at an early age and attended Antioch Baptist Church in Flint, Michigan. Dianne attended Northern High School in Flint and later attended college in the city. Her college major gave her the drive to pursue a career in Education. As a result, she became a Preschool Assistant teacher. This carried over to Dianne developing a fondness for helping all her nieces, nephews and grandchildren with their homework. She especially loved to help them with their science projects. Her work career also included a five-year period of employment at a variety of jobs. She then started her career path with Chrysler UAW 1700 in 1997 at Detroit Axle, then later transferring to Sterling Heights Assembly Plant where she retired from in August of 2020. She was a very loving and affectionate person and was known to be outspoken and direct with everyone she knew. She loved shopping, watching movies with sub-titles, and having a good time. She shopped so much that her sister Cherri commented that Dianne ran the Handley’s Department Store. If you need a fan, she had it; and if you needed shoes, she had them too. The Handley home was the site of countless card games, and Dianne was present at practically, every one of them. She was a fierce competitor, and she played the games well. Dianne was never happier than when she was surrounded by family and friends, sharing fun, happiness and most of all love. Dianne’s health started declining shortly after retirement, ending with her demise on Friday, March 25, 2022, at St. Joseph Mercy Oakland Hospital of Pontiac, Michigan. Her passing leaves a huge hole in our hearts but at the same time we are left with so many wonderful and lasting memories. Dianne is proceeded in death, her paternal grandparents, Roy and Lelia Handley; father, Densell Handley; sisters, Lou Juan White and Jennifer Lynn Handley; brothers, Larry “LC” Handley and Richie Handley. Dianne leaves to cherish her memory and continue her legacy: Mother, Rozene Handley, of Flint, MI; Daughters, Racheal Duggan, of Seattle, Washington and Rosalind Handley, of Pontiac, MI; Son, Jeffrey (Martha) Handley, of Pontiac, MI; Grandchildren, Raven Handley, Trevon Etress, Chelsey Pettaway, Jeffrey Harris, Tre’triana Handley, Lael Nelson and Johntrea Nelson; Great Grandchildren, Amari, Aaron Jr, Amir, A’Nala, Armani, Italy, Jamar Jr. and Alexzander; Sisters, Vivian Lorriane Handley, of Hawthorne, California, Cherri (Winston) Handley Allder, of Leland, North Carolina, Shannon Handley, of Middleton, Wisconsin, Raycoa Handley of Atlanta, Georgia and Trina (Sherman) Handley-Boaz of Lawrenceville, Georgia; Brothers, Gary (Brenda) Handley of Flint, MI, Jimmie (Marilyn) Handley of Flint, MI. Dianne also leaves to mourn her passing, Special friend, Darlene MacLloyd; God Sister, Denise (Gregoroy) Howell, an endless host of relatives, friends and neighbors too numerous to name here including special friend, Darlene MacLloyd; god sister, Denise (Gregory) Howell. Dianne was preceded in death by her paternal grandparents, Roy and Lelia Handley; father, Densell Handley; sisters, Lou Jean White and Jennifer Lynn Handley; brothers, Larry “LC” Handley and Ritchie Handley.

The family of Ms. Linda Dianne Handley created this Life Tributes page to make it easy to share your memories.

Send flowers to the Handley family.