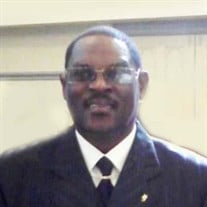 LIPSEY. Mr. Leo - Age 71, passed away Thursday, August 12, 2021 at Michigan Medicine-Ann Arbor, MI. Family hour 7:30 AM Saturday, August 21, 2021 from the Chapel of Lawrence E. Moon Funeral Home, 906 W. Flint Park Blvd., with funeral service commencing at 8:00 AM, Supt Brian Grundy, officiating. Interment Sunset Hills Cemetery, G-4413 Flushing Rd. Friends and pallbearers will assemble at the Funeral Home, 7:30 AM Saturday. Mr. Lipsey will lie in state in the Chapel of Lawrence E. Moon Funeral Home, and may be viewed from 12:0 PM-6:00 PM Friday. Born to Jessie and Mary Vance Lipsey, on March 23, 1950 in Tunica, Mississippi. He was the fifth boy born of the twelve children. Leo attended Dunbar High School in Earle, Arkansas. After leaving Arkansas Leo traveled a lot as a young man having fun and enjoying life. He finally settled in Detroit, Michigan and later moved to Flint, Michigan. Leo started working for General Motors Corporation in Flint where he met Shirley Williams. The meeting occurred as Shirley was going upstairs to the cafeteria for lunch and he pulled her hair and said, “Hey my name is Leo,” from that time on a dating process began. Fourteen years later they were married, with the blessing of his now deceased brother, Herbert Lipsey. Leo married Shirley Ann Williams on July 10, 1994, where she become Shirley Ann Lipsey. Making his life ever more perfect he accepted Christ on September 15, 2002, under the pastorship of Supt. Brian D. Grundy, Greater New Bethel Church Of God In Christ. Leo retired from General Motors Corporation as a Machine Operator. He was a member of UAW Local #598 for 40 years. He loved God, his wife and his family. Life after work was filled with shopping for antiques, thus he was known as “The Antique Man”. He also enjoyed shopping, buying old cars, walking, running, exercising and jewelry. Leo was the only person known by his family to wear a watch on each wrist. Leo Lipsey leaves to cherish his memories: a wife, Shirley; his eight awesome yet always keeping him thinking on his feet and challenging every move children, Jesse, Nichole, Elaine, Jervan, Rachel, all of Atlanta, Georgia, Joseph of Wisconsin, Doroth’ea and Raymond, both of Flint; a host of grandchildren; 2 great-grandchildren; a host of nieces and nephews; 7 siblings, 3 sisters and 4 brothers, Tennie Willis of Memphis, Tennessee, Earnestine Merdith of Earle, Arkansas, Carrie Coleman of St. Louis, Missouri, Luther Lipsey (Natline) of Detroit, Michigan, Guy Lipsey (Denise) of Earle, Arkansas, Frankie Lee Lipsey (Rosia) of Memphis, Tennessee and Robert Lipsey (Sarah) of South Haven, Mississippi; a host of other relatives and friends. Leo was preceded in death by his parents, Jessie and Mary Vance Lipsey; brothers, W.L. (Catherine) Lipsey, C.L. (Jefferie) Lipsey, Herbert Lipsey and Jessie Lipsey (at birth). The family would like to express special thanks to Michigan Medicine, University of Michigan, 1500 E. Medical Center Dr. Ann Arbor, Michigan 48109, for all their help and support during Leo’s care with them.

The family of Mr. Leo Lipsey created this Life Tributes page to make it easy to share your memories.

Send flowers to the Lipsey family.