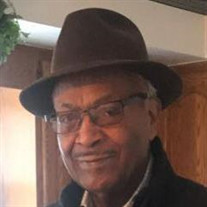 TUCKER, Mr. Lee G. - Age 94, passed away Friday, April 1, 2022, in Georgia. Family hour 10:00 AM Monday, April 11, 2022, at Rising Star Missionary Baptist Church, 502 W. Flint Park Blvd., with funeral service commencing at 11:00 AM DeVontae Powell, officiating. Interment Sunset Hills Cemetery, G-4413 Flushing Rd. Friends and pallbearers will assemble at church 10:00 AM Friday. Mr. Tucker will lie in state in the Chapel of Lawrence E. Moon Funeral Home, 906 W. Flint Park Blvd., and may be viewed from 10:00 AM - 4:00 PM Sunday with family present from 1:00 PM - 4:00 PM to receive friends. Mr. LeeGree Tucker was born October 10, 1927 the son of Cornelius and Gertrude Tucker in Crawford, Mississippi. LeeGree confessed Christ at an early age and was baptized at Charity Missionary Baptist Church in Crawford, Mississippi. He later continued his dedication at Antioch Baptist Church for over 40 years. “Gree” as he was affectionately known, moved to South Bend, Indiana and was united in Holy matrimony to Gladys Robinson. They relocated to Flint, Michigan in 1955. To this union two daughters were born. LeeGree was an employee of General Motors Chevrolet Metal Fabricating unit of General Motors. Retiring after 35 years. Lee was a member of the Colonial Drive Block Club for over 30 years. LeeGree was always known for his impeccable Manner of dress and appearance. The man loved an expensive suit and shoes with a shine that you could see your reflection in. LeeGree loved his family and spent every summer near, until he was unable, in his hometown of Crawford, MS. He loved a good football and basketball game. Lee could be found every Sunday in his favorite recliner, remote in hand watching each competition. LeeGree had a vivacious and unique personality He kept you laughing with his funny remarks and sly comebacks, most which were often unrepeatable for those of you who knew him well. A great source of pleasure for him was taking care of his home and his second love “HIS Lawn.” He was known to hold a friendly competition with the other men of Colonial Dr. Every summer it was a race to see who had the greenest lawn and the prettiest flowers. Of course, he always came out on top. LeeGree completed his assignment April 1, 2022 in Atlanta, Georgia. LeeGree leaves to cherish his memories his wife of 67 years, Gladys Tucker of Atlanta, GA; daughters, Karen (Anthony) Fields, Kelly (Angelo) Parker; four granddaughters, Kaela (Keith) White of Atlanta, GA, Jadin Fields of Cape Coral, FL, Kerrington Parker of Atlanta, GA and Kerri (Derrice) White of TX; grandsons, Anthony Cajuan (Amarilys) Fields of Las Vegas, NV, Angelo Parker of Atlanta, GA. Anthony (Adrienne) Williams of Birmingham, AL and Desmond Grant of Anniston, TX; seven great grandchildren; brother-in-law, Rev Wilbert Campbell; and a host of nieces, nephews, cousins and friends including special cousins, Earnestine Gray, Mose and Mary Tucker and Ella Lipford. LeeGree was preceded in death by his parents, Cornelius and Gertrude Tucker; and two sons, Leon Anthony and Lee Tucker-Williams; four brothers, Cornelius Tucker, James Tucker, John Tucker and JP Tucker; five sisters, Bethean Jones, Luevern Bland, Minnie Atkins, Annie Pearl Malone and Gertrude Campbell.

The family of Mr. Lee G. Tucker created this Life Tributes page to make it easy to share your memories.

Send flowers to the Tucker family.