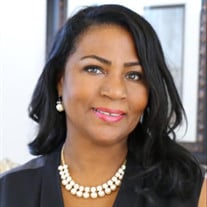 WILKERSON, Mrs. LaVonda Sue - Age 64, passed away Wednesday, September 15, 2021 at her residence. Family hour 10:00 AM Thursday, September 23, 2021 at New Jerusalem Full Gospel Baptist Church, 1035 E. Carpenter Rd., with funeral service commencing at 11:00 AM. Interment Sunset Hills Cemetery, G-4413 Flushing Rd. Friends and pallbearers will assemble at the church 10:00 AM Thursday. Mrs. Wilkerson will lie in state in the Chapel of Lawrence E. Moon Funeral Home, 906 W. Flint Park Blvd., and may be viewed from 12:00 PM - 6:00 PM Wednesday, with the family present from 4:00 PM - 6:00 PM to receive friends. Mrs. LaVonda Sue “BaBa” Wilkerson was born on March 5, 1957, in Flint, Michigan, the daughter of Charlie and LaBertha “Lee” White. LaVonda was employed at General Motors Corporation not only as member of Skilled Trades, but also as the Coordinator of GM’s MTP Program, nurturing young minds as they sought to learn the skilled trades. She continued her education while raising her sons, earning her associates degree at Baker College and later achieving her bachelor’s degree at Mott College. LaVonda did so to set her sons’ expectation of education, removing all doubt from her then young children, that they could achieve anything. After retiring with thirty-three years of service from General Motors she made time to enjoy her husband and two sons. She enjoyed singing, dancing, sewing, and exploring Chicago. LaVonda was often found having a good laugh with strangers because her personality and love were contagious. Mrs. LaVonda Wilkerson vehemently practiced thinking, believing, and living beyond all accepted expectations. She entrusted and encouraged this vision in others. LaVonda also believed in giving her time, love, and encouragement to help others whenever the opportunity and need presented itself. As a woman of faith, she was the epitome of a cheerful giver. The love she gave to others was only matched by her love of God, as He was “always the head of this household.” Even though she was surrounded by her husband and sons as the men of the house, make no mistake, she was their strength, heart, soul. LaVonda was the love of James Wilkerson’s life for 39 years. Their union of love and devotion was unmatched. Mrs. LaVonda Wilkerson was cherished, loved, and adored through and through by her husband, which will continue until they meet again. Mrs. Lavonda Wilkerson leaves to cherish her memories: her husband and the love of her life, James Wilkerson; two sons, NaVarrio Douglas Wilkerson and Stephon James Wilkerson; 6 sisters, Patricia Gill, Nola Walker, Gwendolyn (Rufus) Edwards, Linda (Solomon) Outlaw, Cassandra White and Sharon Lusane; sisters-in-law; Bennie King, Mary Hopkins, all of Flint and Flora (John) Logan of Jonesville, LA; brothers-in-law, Ben (Mythal) Wilkerson of Penson, AL and Danny Wilkerson of Pontiac, MI. Mrs. Wilkerson was preceded in death by her parents, Charlie and LaBertha White; grandparents, Willie and Evelyn Odom; brother-in-law, Stanley Gill.

The family of Mrs. LaVonda Sue Wilkerson created this Life Tributes page to make it easy to share your memories.

Send flowers to the Wilkerson family.