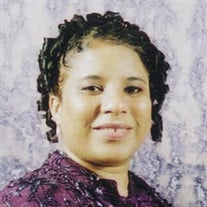 JOHNSON, Ms. LaTanya Patrice - Age 57, passed away Tuesday, February 16, 2016 at McLaren-Flint. Family hour 1:00 p.m. Sunday January 21, 2016 from the Chapel of Lawrence E. Moon Funeral Home, 906 W. Flint Park Blvd., with funeral service commencing at 2:00 p.m. Pastor Steven Shafer officiating. Family and friends will assemble at the funeral home 1:00 p.m. Sunday. Ms. Johnson will lie in state in the Chapel of Lawrence E. Moon Funeral Home. Public viewing during family hour only. Ms. LaTanya Patrice Johnson was born March 16, 1958 in Flint, Michigan the daughter of Mr. & Mrs. Eddie and Lorraine Johnson. She was the second eldest of what would be 6 children. LaTanya earned her nickname “Pee Wee” from her birth weight of a mere 5 pounds. LaTanya attended Dort Elementary, Emerson Jr. High, and was a very proud Flint Northern “Viking”, “Class of ‘76”. While in High school LaTanya was very active as a Cheerleader and a member of the National Honor Society. She also studied Floriculture at the Genesee Area Skill Center. After graduating High school, LaTanya went on to study Theology at WCG-Ambassador College of Pasadena, CA. In 1978, she returned to Flint finding employment at General Motors - Chevrolet Engine plant. She retired after nearly 25 years of dedicated service. While working at GM, LaTanya spent her time wisely earning her Associates Degree in Computer Science from C.S. Mott College, working part-time for Tadrick’s Tax Service and was the best Wedding Planner and Florist you could ever hire. She stayed busy, as she was also the Treasurer for United Church of God – Flint, and her more recent endeavor was a Girl Scout Troop Leader for Troop #71155 and volunteering at Doyle-Ryder Elementary. LaTanya spent her life as a humble servant to those around her. She never met a stranger. LaTanya was always willing to lend a hand, give a kind word, or provide assistance to anyone. Her heart was filled with the spirit of giving. She had a passion for living life and studying the hidden spiritual meanings around us. LaTanya enjoyed spending time with her family, traveling and listening to music, especially Earth, Wind and Fire. If there was somewhere to go, just know she was coming too! With or without an invitation. Her nephews and nieces were her pride and joy. She loved each and every one of them as if they were her own. There was nothing that could stop her from being there for them. LaTanya pushed all of them to always do their very best at all times, and to let their light shine bright. Ms. LaTanya Patrice Johnson leaves to cherish her legacy her parents, Mr. & Mrs. Eddie and Lorraine Johnson; siblings, Cheryl (Sedgwick) Perry, Talicia (Edgar) Taylor, Mark (Tameka) Johnson and Krystal (Ronald) Wallace; nieces and nephews, LeNisha Perry, JaMial, Jazmin and Jarred Story, E’Licia Wallace, Ishijah Johnson, Ronald Wallace Jr., Mark Johnson II, JaiElyn Johnson, Tyler Boyd, Shaniah Wallace and Kailyn Johnson; a host of other relatives, friends and loved ones. She was preceded in death by her grandparents, Cleophas and Sadie Johnson, Arthur and Dorothy Redmond; infant brother, Myron Dalyn; and nephew, JaVan Story. Our family would like to express a special thank you to the United Church of God, McLaren – Flint CCU Staff, Anthony Floyd, Alphonzo Brown, the family of Angus Williams and anyone that reached out to us during our unexpected time of bereavement.

The family of Ms. LaTanya Patrice Johnson created this Life Tributes page to make it easy to share your memories.