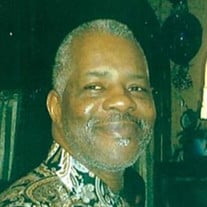 HUMPHRIES, Mr. Larry E. - Age 76, passed away Saturday, May 29, 2021 at his residence. Family hour 1:30 PM Friday, June 11, 2021 from the Chapel of Lawrence E. Moon Funeral Home, 906 W. Flint Park Blvd., with funeral service commencing at 2:00 PM. Interment Sunset Hills Cemetery, G-4413 Flushing Rd. Friends and pallbearers will assemble at the funeral home 1:30 PM Friday. Mr. Humphries will lie in state in the Chapel of Lawrence E. Moon Funeral Home, and may be viewed from 12:00 PM - 6:00 PM Thursday. Larry Ernie Humphries was born September 7th, 1944 in Flint, Michigan, the son of Willie Humphries and Clara Eiland Gould. According to Larry, “People came from miles around to see me, and I didn’t disappoint. I was cute as a speckled pup.” Clearly, he was not one for modesty. Larry received his formal education through the Flint Public School system, and was a proud graduate of Flint Northern High School, “Class of 1962.” He was an active alumnus and attended all class reunions and breakfast club functions. Go Vikings! Never one to shy away from hard work, Larry began his life of service to his community as a Paperboy and later as an employee of the City of Flint. He served his country as a member of the United States Armed Forces. A jack of all trades, he also worked as a licensed Cosmetologist at Benjamin’s. After over 30 years of service, he retired from A.C. Delco, a division of General Motors Corporation. In 1968, he married Cheryl Peterson. During their 24-year union he was blessed with two beautiful children; his baby girl, Ashley Joy and son, Darryl. Larry had a flair for the finer things in life. Whether it was stylish clothes, luxurious furnishings or expensive colognes. He was well traveled and enjoyed visiting new places. He was a former Golden Gloves boxer, and an avid runner and cyclist. Larry took tremendous pride in his yard, and strived to have the best landscaping in the neighborhood. We will miss most and treasure the memories of his quick wit, great sense of humor and captivating storytelling. On Saturday, May 29, 2021, Larry surrendered to the call of the Lord and transitioned from earth to glory. Larry Ernie Humphries leaves to cherish his memories: daughter, Ashley Joy Humphries of Grand Prairie, TX; son, Darryl Alexander Humphries (Checwanda) of Arlington, TX; grandchildren, Monique Braxton of Dallas, TX, Brandon Humphries of Arlington, TX, Darisse Williams of Fort Worth, TX and Shomari Wilson of Grand Prairie, TX; great-grandson, Carson Williams of Fort Worth, TX; companion, LaVerne McGowan of Flint; lifetime friends, Willie Demps, Rashad Shaheed, Christopher Collins, Ray Clemons, Kathleen Etherly, Katherine Johnson, and Lily Russell; canine companion, Jazzy and a host of other relatives and friends. Larry was preceded in death by his father, Willie E. Humphries; mother, Clara Gould; step-father, Warren Gould; grandparents, John W. Eiland and Sophia Frazier Eiland; sister, Beatrice Johnson; brother, Cedric Gould.

The family of Mr. Larry E. Humphries created this Life Tributes page to make it easy to share your memories.

Send flowers to the Humphries family.