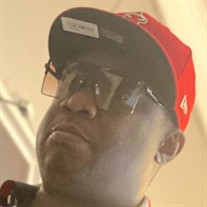 ATKINS, Mr. Kevin Lamont - Age 47, passed away Sunday, February 13, 2022, at Hurley Medical Center. Family hour 10:30 AM Saturday, February 26, 2022, from the Chapel of Lawrence E. Moon Funeral Home, 906 W. Flint Park Blvd., with funeral service commencing at 11:00 AM Pastor George Coulter officiating. Interment Sunset Hills, G-4413 Flushing Rd. Friends and pallbearers will assemble at the funeral home 10:30 AM Saturday. Mr. Atkins will lie in state in the Chapel of Lawrence E. Moon Funeral Home and may be viewed from 12:00 PM - 6:00 PM Friday. Kevin Lamont Atkins was born on February 9th, 1975, in Flint, Michigan. He was born the son of Cristal Kaye Atkins & the late Kevin Stewart. Kevin was raised in the city of Detroit for much of his childhood, adolescence, and early adult life and he expressed an enduring love for his city. He attended Detroit Public schools for most of his educational requirements. In addition, he had a few educational associations to his native city of Flint. After receiving his GED, he attended Wayne Community College to obtain an Associate in General Education Studies. Kevin left prominent footprints wherever his path led him. At the age of 23, Kevin’s path led him to the city of St. Paul, Minnesota where he resided for the next 10 years of his life. He was employed at the Minneapolis Convention Center for over 7 years. Kevin took pride in his job, and he detailed this personal endeavor as one of the happiest times in his life. In 2008, Kevin returned to Michigan to become a permanent resident to the city of Flint. He had a love for cooking and with this love he decided to enroll at Mott Community College to study the Culinary Arts. Overtime, Kevin’s faith in God continued to grow and it manifested in the way that he presented himself, in his movements, and how he interacted with others. His internal light began to glow, and it was visible from the outside looking in. That light inside of him created another direction for his life and his previous choices were no more. Kevin became a member of Redeeming Grace Ministries, and this decision provided him with Hope, and it gave him a new-found purpose, in which provided him with a new path to his salvation. He had a strong love for his family and friends and made several friends over the course of his life. His love represented loyalty, obligation, & admiration. Kevin left our family with a Legacy of Strength, Courage and Perseverance and that shall never be forgotten or taken for granted. Kevin Lamont Atkins leaves to cherish his memory: mother, Cristal Kaye Atkins of Detroit, Michigan; sister, Lakisha Michelle (Cornell) Atkins-Lewis of Flint; 2 brothers, DeAndre Ladrell Atkins of Detroit, Michigan, and Tony Maurice Atkins (Pebbles) of Atlanta, Georgia; 3 nieces, Sha’Vonte Le’Shawn Atkins, Von’Tairia La’Shelle Atkins, and LaDonna Demps; 2 great-nieces, Taelynn Marie Thompson and Avah Jene’ Michelle Willis, all of Flint, Michigan; nephew, Trae’Von Deriee’ Atkins; great-nephew, Jaycen Adonis Kline; uncles, George (Marie) Atkins and Willis Webster; aunt, Rose Helen (Carl) Gibson, all of Flint, Michigan. Kevin is also survived by his ex-wife, Quiana Coppage; step-daughter, Jahira Coppage of Minneapolis, Minnesota; a host of other relatives and friends including special friends, 1st cousins Keith, Timothy, Necia, Kareem, Maurice, Rodney & Shawana Webster. Theodorick, Tony and Nadia Gibson. LaTonja Bennett, Jamille, Akeem and Chanelle Atkins. Special cousin Xavier Chandler and Special friend Ricco Randle. Kevin Lamont Atkins was preceded in death by his grandmothers, Thelma Atkins and Ethel Mae Stewart; father, Kevin Stewart; step-son, Davonta Coppage; and aunt, Mary Luease Webster. The family would like to express special thanks to Hurley Hospital ICU Staff, DaVita Dialysis Hurley One Plaza, Redeeming Grace Ministries, Pastor George Coulter & Congregation, and Covenant Worship, Pastor Ricky Callaway & Congregation.

The family of Mr. Kevin Lamont Atkins created this Life Tributes page to make it easy to share your memories.

Send flowers to the Atkins family.