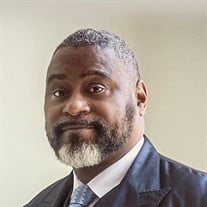 STEWART, Pastor Kenneth Lloyd - Age 64, passed away Sunday, January 2, 2022, at his residence. Pastor Stewart will lie in state at House of Prayer Missionary Baptist Church, 1851 W. Carpenter Rd., and may be viewed from 12:00 PM - 6:00 PM Saturday, January 8, 2022, with a celebration of life service beginning at 3:00PM. Family hour 3:00 PM Sunday, January 9, 2022, at House of Prayer Missionary Baptist Church with funeral services commencing at 4:00 PM. After which Pastor Stewart will be taken to Brown Funeral Home, 2704 Commerce Cir., Pine Bluff, Arkansas 71601, (870)534-3210. With services to be held 11:00 AM Wednesday, January 12, 2022, at Judah Restoration Worship Center, 2401 South Main St., Pine Bluff, Arkansas 71601. Interment Graceland Cemetery, 2122 West Pullen St., Pine Bluff, Arkansas 71601.Pastor Kenneth Lloyd Stewart was a native of Pine Bluff, Arkansas, born July 26, 1957. He was the seventh child of the late Leon Sr. and Ardalia Shaw-Stewart. Pastor Stewart graduated from Watson Chapel High School in 1975, after which, he attended the University of Arkansas at Pine Bluff from 1976-1979. He also studied Theology at the Arkansas Baptist Extension. In addition to his Pastoral duties, he was employed at the Lawrence E. Moon Funeral Home for more than 20 years. He was a member of the Pine Bluff Minister’s Alliance and Vice-President of the Regional Arkansas Baptist Convention Music Department. Pastor Steward loved ministering the Word of God and singing Praises to his Name. Pastor Stewart was the Pastor of Lampkin Chapel Church for 12 years, ending that tenure in 1997, after the homegoing of the beloved founder of the House of Prayer Missionary Baptist Church, Rev. Charlie Thrower on December 5, 1996. Pastor Stewart was called as Pastor Elect on May 30, 1997. Pastor Stewart assumed the position as Pastor, July 5, 1997 and was officially installed as the new Pastor on December 7, 1997. Pastor Stewart was a devoted husband to Irma Jean Taggart-Stewart whom he married July 24, 1987. This union lasted 34 years until the Lord called him home. He was devoted father to 7 children, Derrick (Antionette), Kennesha (Earl), Brandon, Micah, Marcus, LaTonya (Vaschon), and Pete (Nakia). As well as a devoted brother to Curtis Bernard Stewart; 15 grandchildren; a host of aunts, uncles, nieces, nephews and friends. Pastor Stewart was a born, again Holy Ghost filled preacher, teacher and believer in the Bible. He was a great leader, talented organist, pianist, vocalist and evangelist and he continue to “Praise A Standard” at the House of Prayer Missionary Baptist Church. What I Believe, he would want you all to remember is that although he is no longer physically here, in the House of Prayer, or in the House to Pray……But Your Relationship with Christ Through Prayer is what will secure you a Mansion in Gods House!!! So go ahead and cry your last tear and know that Pastor Kenneth Lloyd Stewart, the servant, is Alright. Services will be live streamed at https://youtu.be/jD6psMCzUOY

The family of Pastor Kenneth Lloyd Stewart created this Life Tributes page to make it easy to share your memories.

Send flowers to the Stewart family.