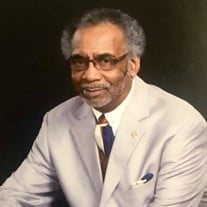 MOORE, Mr. Kenneth Owen - Age 74, passed away Tuesday, November 23, 2021 at his residence. Family hour 10:30 AM Friday, December 3, 2021 at New Creation Church of God, 3472 Lennon Rd., with funeral service commencing at 11:00 AM. Interment 9:00 AM Monday, December 6, 2021 at Great Lakes National Cemetery, G4200 Belford Rd., Holly, MI. Friends and pallbearers will assemble at the church 10:30 AM Friday. Mr. Moore will lie in state in the Chapel of Lawrence E. Moon Funeral Home, 906 W. Flint Park Blvd., and may be viewed from 12:00 PM - 6:00 PM Thursday. Kenneth Owen Moore, a devoted husband, father, grandfather, brother, and friend. He was born on August 8, 1947, in Philadelphia, Mississippi. He was the oldest child of eight, born to Vardaman and Gladys Thomas Moore. Kenneth passed peacefully at home on Tuesday, November 23, 2021. He will be greatly missed. Ken and his family relocated to Flint, Michigan when he was very young. He was a follower of Christ and was raised in the church. He was baptized as a child in the Methodist church and grew up attending Twelfth Street Church of God, now New Creation Church of God. He was blessed to be mentored by many loving and faithful Church of God saints and often spoke about how he valued their watchful care. Ken, attended Flint Public Schools; including Doyle Elementary and Whittier Junior High. He is a proud graduate of Flint Central High School, class of 1965. He went on to attend Mott Community College. Along the way, Ken became affectionately known to many as “Moe”. Ken was employed at GM Truck and Bus until he was drafted into the U.S. Army. He served honorably; spending most of his time in Korea. After serving in the military, he returned home to Michigan and resumed his career at GM Truck and Bus and at General Motors Product Development where he worked for over 43 years. Ken became good friends with many of his co-workers and tried to keep in touch with them through the years as he counted them as family. On September 2, 1972, he hit the jackpot, marrying the love of his life, Deborah Dwan White. To this union, two loving and supportive daughters were born: Dr. Kimberly Dwan Moore (husband Kelley McChester) and Kristin Danyl Moore (husband Tony Burks). The stars that lit up his life were his grandchildren: Kennedy Grace Burks, Karson Honor Burks, Khristian Honor Burks, along with Jonah McChester and Madeleine McChester. Ken leaves one brother to cherish his memory, Billy Keith (Vivian) Moore, and a brother-in-law, Sherman Clifton; God-Sister, Tracey Cavette Palmer, God Daughters Kathryn Palmer, Gabrielle Green, and Karrington Ferguson: Aunts: Edna Pearl McCarty (Chicago, IL), Vida Moore (Jackson, MS) and Juanita Harvey (Chicago, IL). When he and Deb married, not only were they united, but their families became truly united as well. From the very beginning, he became a son to his Mother and Father-In-Law (TJ and Bertha White) and a big brother to Deb’s siblings; Rhonda (Darryl) Myles, Darren (Nora) White, Wendell White, Ricky (Gloria) White, and Dr. Clarice White-Hardaway, (in addition to several deceased brothers-in-law). He had many nieces, nephews, and cousins who were also very special to him. There was so much mutual love among them all. His Mother’s love of family, sharing, and fellowship was instilled in him and something he truly valued. Ken had many close friends including his high school classmates and his Truck and Bus co-workers. His special friends include Clyde Earnest, Jimmie Miller, and Jerry Webster (who was always his ‘go-to’ guy). Everyone who knew Ken or “Moe”, knew that he always made an effort to dress sharp. He displayed a spirit of excellence and prosperity. God was good to him in so many ways. Ken also enjoyed traveling (after some coaxing), watching movies, sports (big U of M fan), along with fishing, and making connections on Facebook. He also supported public education by regularly playing the lottery. Christmas was always a special time of year when he and the family traveled to Tennessee. He would buy gifts to share with family and friends. Ken also enjoyed attending The Moore’s Family Reunions in Philadelphia, MS. He valued keeping in touch and seeing everyone and sharing in the legacy of his grandparents, Ben and Cora Moore. He also made an effort to remember birthdays and to just check up on family members. He was a kind and thoughtful man. Ken was preceded in death by his parents, sisters; Barbara, Sheila, Sherry, Patricia, and Doris (Nita), and brother Kevin, along with Aunts, Uncles, God Mother Katherine Price, and other loved ones. We thank God for him and all the special times we shared. To God be The Glory! In lieu of flowers, the family request that donations be made to New Creation Church of God/Wall of Faith In Memory of Kenneth O. Moore Kenneth Moore service will be live streamed at www.nccflint.org.

The family of Mr. Kenneth Owen Moore created this Life Tributes page to make it easy to share your memories.

Send flowers to the Moore family.