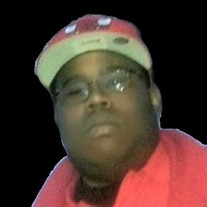 LIGHT, Mr. Kenneth Bernard - Age 32, passed away Saturday, April 9, 2022, at Hurley Medical Center. Family hour 1:30 PM Thursday, April 21, 2022, from the Chapel of Lawrence E. Moon Funeral Home, 906 W. Flint Park Blvd., with funeral service commencing at 2:00 PM. Interment River Rest Cemetery, G-4413 Flushing Rd. Friends and pallbearers will assemble at the funeral home 1:30 PM Thursday. Mr. Light will lie in state in the Chapel of Lawrence E. Moon Funeral Home and may be viewed from 12:00 PM - 6:00 PM Wednesday. A beloved son, grandson, brother, nephew, uncle, cousin and friend, Kenneth Light left this world unexpectedly, on April 9, 2022. Born in Detroit, MI on August 30, 1989, to Cassandra (Jones) Light and Gregory Spottsville, Sr., Kenny grew up in Flint, MI, where he attended Flint Central High School. Kenny was preceded in death by his grandparents Richard and Sallie Spottsville, Madeline Dunking and Frederick Turner; uncle Jimmy Smith; sister Greyla Spottsville and niece Destiny Spottsville. He leaves behind his mother, Cassandra Light; father, Gregory Spottsville Sr.; brothers Jerry, Frederick, Gregory Jr., and Montez; sister Amanee; honorary brothers Terence and Richard III (Tray); aunts Rolanda Williams, Vennie Willis, Renee Larry, Kimberly Edwards, Karman Edson, and Theresa Pringle; uncles Deacon Ricardo Chew, Richard Spottsville Jr. and David Gill; nephews Kahlil, Jaryn, Gregory III, Jaquan, Amyre, Joe, Jamario, Jeremiah, Zahir, I-Honor, and I-Royal; a host of cousins, friends and many friends that became family. Although only 32 at the time of his death, Kenny affected many people in his lifetime. He was a rare combination of someone who had a love of life and a firm understanding of what was important — the simplicity of living a life with those you love. His awareness of the importance of a life lived with the ones you love over any material possession with maybe the exception of his headset and controller for his Xbox. Whether you called him Ken, Big Man, Skinny Kenny, Ham Bone, Cuzzo, Son or Nephew: you always knew you could call him. He was a true friend to his family and friends – ready and willing at a moment’s notice. He had an unbreakable bond with his siblings and cousins he considered siblings. He was the truth: dependable, genuine, and selfless. He told the truth, gave advice, told you when you were wrong and took our secrets to the grave. We all felt like he was 'that' person to us until you hear more stories, you realize he was 'that' person for everyone. He always showed up without question and never asked for anything in return. He lived by the motto “all family, no friends”. While Kenny did not technically have his own kids, he had more kids than anyone. He took on the role of father, godfather, uncle and big Cuz to several kids. He was their biggest supporter and advocate and cherished every moment with them; his presence will surely be missed in their lives. He was a pillar of the community and always looked out for his hood. He especially loved his role as uncle and had a strong bond with his nephews. Some of Kenny's most impactful routines centered around supporting and sideline coaching youth sports, hosting Trunk or Treats for Halloween and back to school giveaways for the neighborhood kids, video games and spending time with family. He was a lover of sports, video games, movies, and cracking jokes. He was a self-proclaimed TV critic and enjoyed listening to music. He was funny and outgoing, but he was also introverted and introspective. He was fiercely loyal to his friends and family. We will always remember his smile, pure heart, and caring personality. He had an infectious personality and always made people around him laugh. His presence in our lives will be truly missed and we were blessed to have what time we did with him. The way he died is just like he lived: he wrote his own rules, he fought authority and he paved his own way. And if you said he couldn’t do it, he would make sure he did. He was a real one and as solid as they come. While many of us lost our favorite (brother, cousin, uncle, nephew, or friend), when you think of Kenny, celebrate the good memories you have of him. Remember that life is fragile and short and should be lived to the fullest. Rest easy Ken, you deserve it. You held everyone down and now it's our turn to return the favor. While we will forever miss you, your company, your smile, voice and laugh; we will take solace in the fact that you are no longer in any pain and are in a better place. Keep watching over us, we'll always need you. We hope you know just how much you were loved. Things will never be the same, that's just the way it is.The family would especially like to thank those that cared for him while he was sick. Whether it was prayers, rides to treatments, spending time with him, bringing food, being a listening ear, calling or sending supportive messages – all of it mattered and helped. A special thank you to Chelsey Lepard, Eugene Gill, James Wade, Jesse, Kelley Manns, Moe, the White/Faust Family, and the Lawson Family.

The family of Mr. Kenneth Bernard Light created this Life Tributes page to make it easy to share your memories.

Send flowers to the Light family.