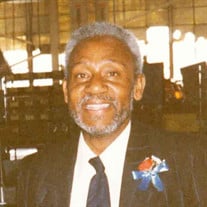 ROSS, Mr. Julius Levern, - Age 77, passed away Sunday, June 20, 2021 at his residence. Family hour 10:30 AM Saturday, June 26, 2021 at Joy Missionary Baptist Church, 670 E. Carpenter Rd., with funeral service commencing at 11:00 AM, Pastor Warwick Goodwin Host Pastor, Rev. Ben Ross, officiating. Interment Sunset Hills Cemetery, G-4413 Flushing Rd. Friends and pallbearers will assemble at the Church 10:30 AM Saturday. Mr. Ross will lie in state in the Chapel of Lawrence E. Moon Funeral Home, 906 West Flint Park Blvd., and may be viewed from 12:00 PM - 6:00 PM Friday, with family present from 4:00 PM-6:00 PM to receive friends.Deacon Julius Levern Ross went home to be with the Lord on Sunday, June 20, 2021. Julius was born February 11, 1944 in Lisbon, Arkansas. The 10th of 15 siblings to Calvin and Mealand Ross. Julius “JL” graduated from Smackover Training School in Smackover, Arkansas. He then went on to further his education at Arkansas Baptist College in Little Rock, Arkansas majoring in Secondary Education, with a minor in English. Julius accepted Christ and was baptized at an early age at Sweet Canaan Baptist Church in Arkansas. After moving to Flint, Michigan, Julius served with Family Missionary Baptist Church under the leadership of Rev. Tellis Simon where he became very active in the church and was ordained as a deacon. In 1982, Julius joined the historic Mt. Olive Missionary Baptist Church under Rev. Dr. Roy I. Greer. He diligently served on various ministries; Deacon Ministry, Sunday School, Male Chorus, Mass Choir, Building and Grounds Ministry until 2020. He loved his church, he was a giver of his time, and he made many people laugh and provided an ear when needed. Julius led with the love of God as His servant. Julius was united in Holy Matrimony on 12/21/1968 to Ms. Gloria Goss and to this union, 1 son, Kevin (Bruno) and 1 daughter, Ta-Nisha (Nene) was conceived. Julius loved his family with all he had. He was always available for them. He was the ultimate father. He provided, he taught, and he loved with no conditions. He supported, celebrated and loved them with the most perfect love that a parent could provide. As Julius served the church, he served and led his family at home. The love, laughter and lessons that he provided will never be forgotten. Julius proudly worked for AC Spark Plug (General Motors/UAW Local 651) for 30 years; retiring in 1995. GM is where he developed his love for fancy cars. He was such a hard worker and a regular handy man. There was no task he wouldn’t try. One of his passions was working in the garden. He loved watching his produce thrive. He would get excited about the things in his garden; even the things he didn’t eat. He would give them to others in the community or church. He had a heart of gold. Deacon Julius Levern Ross leaves to cherish his memories: wife, Gloria; devoted and favorite daughter, Ta-Nisha Ross of Ft. Lauderdale, FL; devoted son, Kevin (Shamika) of Flint; 4 grandsons, Trae’Von Huddleston of Houston, TX, Ke’Lon “Man” Ross of Durham, NC, DeMontay Scott and Khari “Fat Jaws” Ross of Flint; great-grandson, Trae’Von “TJ” Huddleston Jr. of Lake Charles, LA; Sisters: Earlean Dunn, Vera Jones, Pearl (Ernest) Williams of Smackover, AR and Joann Ross of Inglewood, CA; Brothers: Charles (Elizabeth) of Smackover, AR, Eddie (Fonda) of Eldorado, AR, Ben (Effie) of Atlanta, GA, and WC (Donnie) Ross of Flint; a host of nieces, nephews, cousins and other relatives and friends including god-son, Jeremy Dukes; very special great-niece, Riley Hall of Durham, NC; and his favorite grand-dog, Bailey. Deacon Ross was preceded in death by his parents, Calvin and Mealand Ross; Mother Giles, brothers, Calvin (Scobie) Ross Jr., William (Bay) Ross, Milton Ross, and John Ross; sister, Bessie (James) Searcy; very special friends, Mr. Decellar Spencer and Mr. John Hamlin. The family would like to express special thanks to the members of the Mt. Olive Deacon Ministry for your strong presence and continued support which kept him uplifted. Special thanks to the nurses of McLaren Hospice: Michelle, Bill, Jarret and Rhonda (massage therapist). Very special thanks to the Blackington Home Care Team Dr. Khari Ross and staff, lead pre-nurse Q, Bruno, Nene, and Man.

The family of Mr. Julius Levern Ross created this Life Tributes page to make it easy to share your memories.

Send flowers to the Ross family.