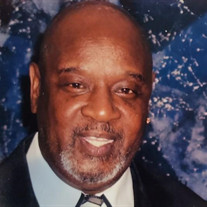 COOPER, Mr. Jim Lee "Joe" Sr. - Age 80, passed away Monday, June 28, 2021 at Medilodge of Grand Blanc. Family hour 10:30 AM Thursday, July 8, 2021 from the Chapel of Lawrence E. Moon Funeral Home, 906 W. Flint Park Blvd., with funeral service commencing at 11:00 AM Pastor Michael Hayes officiating. Interment Great Lakes National Cemetery, G4200 Belford Rd., Holly, MI. Friends and pallbearers will assemble at the funeral home 10:30 AM Thursday. Mr. Cooper will lie in state in the Chapel of Lawrence E. Moon Funeral Home and may be viewed from 12:00 PM - 6:00 PM Wednesday.On Monday, June 28, 2021, Jim Lee Cooper, Sr., exhaled his last breath on earth and inhaled his first breath of eternal life in the heavens. The gap closed from corruptible to incorruptible, from mortal to immortality, and death was swallowed up in Victory! Jim Lee Cooper, Sr., a.k.a Joe Cooper, was sent from the thoughts of God to B.C. and Mammie Cooper on April 18, 1941 in Hurtsboro, Alabama. He was given into a family of strapping brothers and one beautiful sister. As most families, the Coopers left the South journeying to a land of liberty and settled in Flint, Michigan. Joe then attended and graduated from Flint Northern High School and later enrolled in Detroit School of Business. As a patriot, he served his country as a soldier in the United States Army and while doing so, he met and married his beautiful wife of forty-seven years, Earsalene Wallace Cooper. Together they traveled the highways for many years. A great supporter to his wife and children he worked diligently, faithfully, steadfastly, and untiringly at General Motors for thirty-seven years without missing one day of work. A quiet man with character and integrity he united with The House of Prayer Missionary Baptist Church where he remained a member until his transition. Joe enjoyed traveling, playing cards, listening to music, and barbecuing. He was a pit-master on the grill! He loved family – hanging out with his brothers, sister, nephews, and nieces. He was a sports fan – only smiling when his favorite team made a touchdown or basket. he was soft spoken, very dependable, loving, loved by so very many, kind, a jokester with a contagious smile and always stayed in his lane! Left to cherish and honor his memory are four amazing children: Linda Simmons (Grand Blanc, MI), Carlos Glenn Cooper (Seattle, WA), Wendy Patrice Cooper (Flint, MI), and Jim Jr. (Lanora) of (Burton, MI); six grandchildren: Shatia Rison (Buckeye, AZ), Ta’Sheika Bennett (Dallas, TX), Ja’Nel Jamerson (Phae) of (Ann Arbor, MI), Kalin Ware (Flint, MI), Ryen Cooper (Atlanta, GA), and Gabrielle Cooper (Burton, MI); seven great-grands: Mariyah, Alasa, Alani, Jayce, Shannon, Makhi, and Asahn JaRe.; sisters-in-love, a host of nieces, nephews, and friends. Mr. Cooper was preceded in death by his loving wife, Earsalene Cooper; parents, B.C. and Mammie Cooper; brothers, Wardell, Bennie, Willie and B.C. Jr. and sister, Regina Coleman. The family would like to express special thanks to Terrie of McLaren Hospice.

The family of Mr. Jim Lee "Joe" Cooper Sr. created this Life Tributes page to make it easy to share your memories.