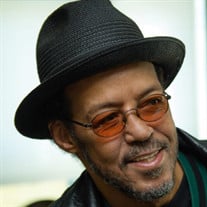 PEARSON, Mr. Jerry Wayne - Age 70 passed away Friday, January 21, 2022, at Willowbrook Manor. Funeral service commencing at 11:00 AM Monday, January 31, 2022, from the Chapel of Lawrence E, Moon Funeral Home, 906 W. Flint Park Blvd. Interment Gracelawn Cemetery, 5710 N. Saginaw St. Friends and pallbearers will assemble at the funeral home 11:00 AM Monday. Mr. Pearson will lie in state in the Chapel of Lawrence E. Moon Funeral Home from 10:00 AM - 4:00 PM Sunday. There will be no public viewing.Jerry Wayne Pearson, known by his immediate family as "Butch"; was born November 4, 1950, to the late Johnnie and Naomi Pearson. After fighting an aggressive battle with an illness, he closed his eyes one last time at Willow Brook Manor in Flint Michigan. To celebrate his life, let us reminisce on the many attributes Jerry had as an avid reader who was replete with knowledge, skills, and abilities. He attended Old Northern High School in Flint, maintaining a 4.0 grade average and won rewards for his wrestling skills. After graduating from Northern High School, Jerry became a licensed carpenter, learned two different styles of martial art, helped to establish an amateur “Motown singing group" and also learned to play the guitar and bongos. Some of his favorite conversations and enjoyable discussions centered around real Black History information and politics. Jerry was exceptional in many ways, one of his mantras in life was, “If you’re not man enough to own it; then don’t do!” Jerry was preceded in death by his parents, Johnnie and Naomi Pearson; and a brother, Jeffrey. There are many who can cherish Jerry Pearson’s memory; his sons, Antonio Evans and Jamal Glover; daughter, Timika (Eugene) Evans, all of Michigan; sisters, Jeannie (Chris) Christian of Texas, Jessie (Freddie) Darrough, Joyce Pearson, all of Michigan and Patricia Smith from Georgia; brothers, Johnnie (Chiquita) Pearson of Maryland and James Pearson of Michigan. There are numerable nieces and nephews who honor Jerry and are celebrating his life with us today. Acknowledgement is also given to very special friend and God send, Sandy Marshall of Michigan. Also, long-time friend, Faye Glover of Michigan. Appreciation is given to Hurley Medical Center and Willowbrook Manor for their care.

The family of Mr. Jerry Wayne Pearson created this Life Tributes page to make it easy to share your memories.

Send flowers to the Pearson family.