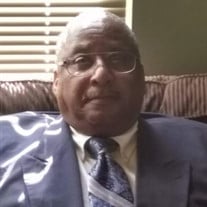 COLEMAN, Mr. James Lewis - Age 75, passed away Wednesday, March 16, 2022, at Hospice House, Owosso, MI. Family hour 10:00 AM Thursday, March 24, 2022, from the Chapel of Lawrence E. Moon Funeral Home, 906 W. Flint Park Blvd., with funeral service commencing at 11:00 AM Pastor John McClane, officiating. Interment Sunset Hills Cemetery, G-4413 Flushing Rd. Friends and pallbearers will assemble at the funeral home 10:00 AM Thursday. Mr. Coleman will lie in state in the Chapel of Lawrence E. Moon Funeral Home and may be viewed from 12:00 PM - 6:00 PM Wednesday. James Lewis Coleman, was born November 10, 1946 to the union of Charlie and Louise Coleman (both preceded him in death) in Guthrie, KY. He confessed Christ at an early age. Later he joined Bread of Life Church under the leadership of Pastor Tyrone Sweeney in Flint, Michigan, and later became a member of Greater Destiny Ministries under the leadership of Pastor John K. McClane. He was a faithful member and a dedicated servant on the Deacon Board. "James" genuinely enjoyed working in the church and would assist Pastor McClane on many occasions. James received his education at Burt High School, in Clarksville, TN. He developed great skills in many hobbies that he enjoyed; such as grilling. He loved to Barbeque. He loved traveling to Mississippi. James was very proud of his family and always wanted them to far exceed his accomplishments. James was employed full-time as a Cook at Bob Evans Restaurant in Flint, Michigan, where he worked faithfully for 25 years. After retiring from Bob Evans, he worked for the Family Service Agency until his health failed. He served in the Army during the Vietnam War. After the Army, James met a beautiful young woman that he would soon marry. On December 16, 1972 James and Georgia Coleman were united in holy matrimony in Indianapolis, Indiana. To their union was born one son, Garry. On Wednesday, March 16, 2022, the Lord visited James room at the Hospice House in Owosso, Michigan, called his name and picked the best flower on his vine, and placed him in His Heavenly Garden. James answered the call and blissfully went to sleep. “I have fought a good fight, I have finished my course, I have kept the faith" (II Timothy 4:7) James L. Coleman leaves to cherish and celebrate his legacy with memories: his devoted wife of 49 years, Georgia M. Coleman; one child, Garry (Rosalind White) Coleman; two grandchildren, Caden L. Coleman and Cameron White; brother, Pastor Charles (Ruth) Coleman; brother-in-law, Johnny Smith; sister-in-law, Jackie Coleman; his favorite aunt, Annie M. Tunley; His brothers, Leroy, Lawrence and Arthur Coleman preceded him in death. Robert Turner was a dear friend. And, a host of nieces, nephews, cousins, relatives and friends.

The family of Mr. James Lewis Coleman created this Life Tributes page to make it easy to share your memories.

Send flowers to the Coleman family.