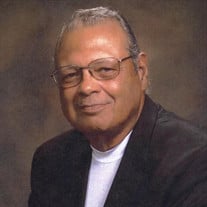 McCLELLAN, Mr. Herbert - Age 78, passed away Wednesday, March 16, 2022, at McLaren-Flint. Family hour 10:00 AM Tuesday, March 22, 2022, at Lawrence E. Moon Funeral Home, 906 W, Flint Park Blvd, with memorial service commencing at 11:00 AM, Rev. Annie Duncan, officiating. There will be no public viewing. Mr. McClellan will lie in state in the Chapel of Lawrence E. Moon Funeral and may be viewed during family hour at 10:00AM. Mr. Herbert Andrew McClellan Jr. was born on December 25, 1943, in Toledo, Ohio, the youngest child of Herbert Andrew and Mabel McClellan. After graduating from high school at the age of 16 and marrying the mother of his children (the late Drew McClellan) they moved to Flint, Michigan, where he began his career at Buick Motor Company, a division of General Motors Corporation. He started as a Foundry Worker in 1964, received his Journeyman Certificate as a Millwright and later became a General Supervisor of Maintenance. Herbert retired from Lake Orion Assembly in 1998 with 34 years of service. Herb was a straight forward, uncomplicated man who said what he meant and meant what he said. He was a highly intelligent person where learning new things and assimilating their efficacy, were easy for him because he was the “best handyman Mr. Fix-it: ever. He enjoyed acquiring gadgets and exploring their usefulness in his world of having the right tool for a job. Herb enjoyed bowling and chasing the golf ball on the links. He was a loving husband and father, and a former member of Westwood Church of God where he used his brilliant baritone voice as a narrator and soloist. Mr. Herbert Andrew McClellan Jr. leaves to cherish his memory: loving wife of 27 years, 11 months (anniversary April 6), Jacquelyn Turner McClellan; daughters, Renee M. (Michael) Simmons of Houston, TX, Tracy L McClellan of Brooklyn Center, MN and Dawn S. Dye of Flint; sons, Herbert A. (Tammy) McClellan III of Clearwater, FL, Timothy A-V (Angelique) Fowler of Rochester Hills, MI and Tiras A-V (Rashell) Fowler of Owosso, MI; 16 grandchildren; 24 great-grandchildren; sisters-in-law, Alder (Hubert) Flonnory of Bartow, GA, Betty Turner of Flint and Eula Rodgers of Waukegan, IL; brothers-in-law, Samuel (Marsha) Turner of Orlando, FL and Isaiah (Connie) Turner of Waukegan, IL; many nieces, nephews, friends and the Trinity United Presbyterian Church family.

The family of Mr. Herbert A. McClellan Jr. created this Life Tributes page to make it easy to share your memories.

Send flowers to the McClellan family.