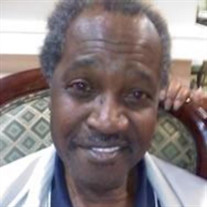 JEMISON, Mr. Herbert B. - Age 84, passed away Saturday, August 7, 2021 at his residence. Family hour 1:30 PM Monday, August 16, 2021 from the Chapel of Lawrence E. Moon Funeral Home, 906 W. Flint Park Blvd., with funeral service commencing at 2:00 PM Pastor Ryan Mixon, officiating. Interment Flint Memorial Park Cemetery, G-9506 N. Dort Hwy., Mt. Morris. Mr. Jemison will lie in state in the Chapel of Lawrence E. Moon Funeral Home and may be viewed during the family hour. Mr. Herbert B. Jemison was born October 10, 1936 in Aliceville, Alabama, the son of Hamp Rice Sr. and Maggie Lee Scarbrough (Jemison). His mother later married Edgar Jemison, who helped raise him. Herbert was raised in the church and was saved at an early age. A member of the 17th Street Church Of God In Christ in Meridian, MS. He enjoyed singing and listening to music. Herbert grew up in Meridian, but later moved up north to Michigan. He met his beautiful wife, Eliza “Liza” Goldsmith in Niagara Falls, NY while visiting family and later married her. They raised children together. Herbert was a resident of Genesee County for over 50 years, with a brief stay in Georgia. He worked for 30 years at AC Spark Plug and Chevy in the Hole, divisions of General Motors Corporation, until he retired. He also was a member of UAW Local #659. Herbert, also known as “H.B” was a member of the Hammer Droppers CB Club of Flint where he talked to people all over the world, he loved to be on his CB. He was known as “Clearwater”, “529”, “Cornerstone” and “Handyman”. He would frequent the Dawn Donuts and McDonald’s on Clio Rd. to meet some of his CB/work buddies to have coffee and shoot the breeze. Herbert enjoyed playing Dominos, card and watching sports, especially baseball. You wouldn’t catch Herbert out of the house without a baseball cap on. He also loved fishing and long-distance driving. Some of his favorite food were catfish, sweet cream corn, collard greens and butter pecan ice-cream. Toward the later years of his life, he seemed to enjoy old school music, dancing, eating ice cream and whistling to “Sitting On The Dock Of The Bay.” Every day he listened to his favorite tunes, and you could catch him tapping his feet, swaying his shoulders or nodding to the music. Many of his medical care providers fell in love with Herbert whom they referred to as “PawPaw”. Herbert was very polite and told ALL that helped assist with his care, “Thank You.” His daughter/caregiver, Lori made sure he was clean and dressed nicely, which made him feel good. When he attended the local Adult Day Care Program, they named him best dressed. His smile would light up a room, and his laughter was infectious. He will be deeply missed by those who knew him and loved him unconditionally. Mr. Herbert B. Jemison leaves to cherish his memory: 10 plus children and over a dozen grandchildren; a sister, a brother, brother-in-law, a host of nieces, nephews, cousins and dear friends. Herbert was preceded in death by his wife, Eliza L. Jemison; father, Hamp (Sallie Jane) Rice Sr.; mother, Maggie Jemison; step-father, Edgar Jemison; brothers, William Gene Rice and Chester Rice; sister, Mary Louise Rice-Smiley; sisters-in-law, Rose Lee Scarbrough and Ester Pearl (Claudia) Hamilton; favorite cousins, JB Scarbrough, Bobby Jean Lyles; grandparents, Rufus and Annie Rice Scarbrough, Gene Rice and Emmerline McCoy. The family of Herbert B. Jemison would like to thank Kindred Hospice staff, especially Audra H., Melissa H. and Robert M. for caregiver support, Ms. Brenda & Laura B. and others that have helped provide care and support during his journey including, the Burton Police Department for conducting there various welfare checks. Also, to his daughter, Lori Jemison for her dedication, sacrifice, patience and devotion to honoring her father with being his Primary Caregiver and Guardian for over 10 years.

The family of Mr. Herbert B. Jemison created this Life Tributes page to make it easy to share your memories.

Send flowers to the Jemison family.