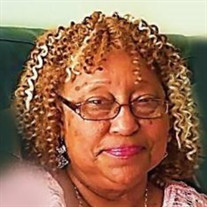 JACKSON-JONES, Mrs. Gloria - Age 71 passed away Sunday, February 13, 2022, at Hurley Medical Center. Family hour 10:30 AM Friday, February 25, 2022, at Family Worship Center Church, 3280 N. Linden Rd., with funeral service commencing at 11:00 AM. Internment: Gracelawn Cemetery, 5710 N. Saginaw St. Friends and family will assemble at the chapel 10:30 AM Friday, February 25, 2022. Mrs. Jackson-Jones will lie in state in the chapel of Lawrence E. Moon Funeral Home and may be viewed from 12:00 PM - 6:00 PM Thursday, February 24, 2022.Mrs. Gloria Jean Jackson-Jones was born on September 7, 1950, in Huntsville, Alabama; the daughter of James Louis and Hattie (Atkins) Conway. She was the eldest of 2 sisters. Gloria was a life-long resident of Flint, MI and a 1968 graduate of Southwestern High School. She attended Mott Community College and in 1970 married Alvin Jackson. They had 3 wonderful children. Throughout her 71 years, Gloria had several occupations which included working in Dietary at Hurley Medical Center, a Sales Associate at JCPenney, and as a Skilled Laborer at Mold Masters. Gloria was a woman of faith and for more than 20 years, she was a member of New Jerusalem Full Gospel Baptist Church. In the early 2000’s, she became a member of Family Worship Center Church International. Gloria’s faith allowed her to handle her many illnesses with grace, a positive disposition, and a smile on her face. She was a three-time cancer survivor. Gloria volunteered at the American Cancer Society of Flint and was an integral part of their ‘Reach to Recovery’ and ‘Road to Recovery’ programs. She encouraged men and woman all across the U.S. battling cancer for the first time. She also volunteered at the Applewood Ruth Mott Foundation, helping with tours of the estate. Gloria enjoyed singing, shopping, spending time with her grandchildren, and watching her favorite shows on television. She also loved to dance and was member of the Gardell Steppers of Hasselbring Community Center. Mrs. Gloria Jean Jackson-Jones leaves ex-husband, Michael Jones; son, Dion Jackson; daughter, Shannon (Chad) Gary; sisters, Beverly (Willie) Wallace and Brenda Miller; 5 grandchildren, 7 great-grandchildren; 2 god-grandchildren; god-daughter, Crystal Woodall; sister-in-love, Mrs. Betty Overton; long-time partner, John Ferrell to cherish her memory; as well as a host of other relatives and friends. Gloria was preceded in death by her husband, Alvin Jackson; daughter, Alunda Jackson-Brandon; parents, James Louis and Hattie Conway; stepparents, James Conway and Laura Louis; mother and father-in-law, Alice and Ishmon Jackson; and niece Angela Gray.

The family of Mrs. Gloria Jean Jackson-Jones created this Life Tributes page to make it easy to share your memories.

Send flowers to the Jackson-Jones family.