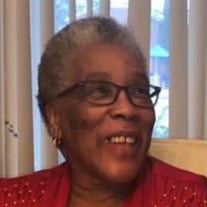 CLEMONS, Mrs. Gertrude Louise - Age 84, passed away Tuesday, December 7, 2021 at Hurley Medical Center. Family hour 10:30 AM Friday, December 17, 2021 from the Chapel of Lawrence E. Moon Funeral Home, 906 W. Flint Park Blvd., with funeral service commencing at 11:00 AM. Interment Flint Memorial Park Cemetery, G-9506 N. Dort Hwy., Mt. Morris, MI. Friends and pallbearers will assemble at the chapel 10:30 AM Friday. Mrs. Clemons will lie in state in the chapel of Lawrence E. Moon Funeral Home and may be viewed from 12:00 PM - 6:00 PM Thursday, December 16, 2021. Life is but a stopping place, a pause in what's to be, a resting place along the road, to sweet eternity. Mrs. Gertrude L. Clemons, was born April 19, 1937 in Bolton, MS to the late B.H Robinson and Gertrude Ollie Williams (Robert Martin, stepfather). Gertrude, whom some affectionately called “Gert”, and most call “Ma or Big Ma” and just a few call “Baby Sis” was a matriarch and a pillar in her village of family and friends. She lived a life full of service that was balanced with love, fellowship, and gratitude. She enjoyed spending time with family and friends, and everyone loved spending time with her as each person had their own relationship and special bond. She had a special way of making everyone feel as though they were her “favorite”. Mrs. Clemons was a resident of Flint, Michigan for 60+ years, retiring from General Motors Corporation after 30+ years. She was a faithful and longtime member of True Light Missionary Baptist Church where she attended for over 40+ years. She served as the President of the Mother’s Board and Senior Usher Board (she loved to Usher) and she participated with the Senior Mission and Kitchen Committee and was a member of the Christian Book Club. She was also a proud member of the Order of the Eastern Star and the Imperial Court Daughters of Isis, Prince Hall Affiliated. She ascended to the top as the Prince Hall, Order of the Eastern Star, Worthy Grand Matron of Michigan, and its Jurisdictions. Faith, Hope, and Charity are the Pillars on which the Masonic Order holds most dear and she represented everything the order demanded. Mrs. Gertrude L Clemons leaves to cherish her memory: daughters, Phyllis Cole and Felicia Thornton, both of Flint, Cassandra Curtis of Lansing, MI and Shondra Clemons of Dayton, Ohio; sons, Cecil Ray Thornton Jr. of Flint and Clemie (Tammi) Thornton of Lansing, MI; 28 grandchildren; 2 grandchildren that she raised as her own, William and Ascensio Tedford of Flint, and 50+ great-grandchildren to whom she loved dearly; 4 sisters, Vera McDonald of Chicago, IL, Leslie Barnett, Ada Robinson and Minnie Carr all of Jackson, MS; 2 brothers, James Martin of West Bloomfield, MI and Lawrence Robinson of Jackson, MS; 4 brothers-in-law, Willie Clemons, Bernard (Gloria) Clemons, all of St. Louis, MO, Mackie (Pauline) Clemons of Philadelphia, MS and Raymond (Emma) Clemons of Flushing, MI, sister-in-law, Retha Clemons of Flint; a host of nieces, nephews, other relatives, her church family of True Light Missionary Baptist Church and friends. Mrs. Clemons was preceded in death by her husband of 31 years, Mr. Charlie R. Clemons; daughter, Jacqueline D. Houston; 2 grandchildren; parents; sister, Patricia McKinley; brothers, Tommy Robinson and Robert Robinson; son-in-law, Gene Cole; 1 sister-in-law; and 5 brothers-in-law,

The family of Mrs. Gertrude Louise Clemons created this Life Tributes page to make it easy to share your memories.

Send flowers to the Clemons family.