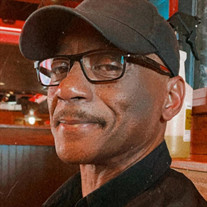 NEALY, Mr. George Kevin - Age 62, passed Friday, April 8, 2022 at McLaren-Flint. Family hour 10:00 AM Wednesday, April 20, 2022 from the Chapel of Lawrence E. Moon Funeral Home, 906 W. Flint Park Blvd., with funeral service commencing at 11:00 AM. Elder Theodore Files, Officiating. Interment Sunset Hills Cemetery, G-4413 Flushing Rd. Friends and pallbearers will assemble at the Chapel 10:00 AM Wednesday. Mr. Nealy will lie in state in the Chapel of Lawrence E. Moon Funeral Home and may be viewed from 12:00 PM - 6:00 PM Tuesday. George Kevin Nealy Jr. was born December 13, 1959 in Manhattan, New York to George and Betty Ruth (Reid) Nealy. Kevin as most known grew up in Flint, Michigan and later with his parents and siblings moved to Mt. Morris, Michigan. While attending Beecher High School he won many awards in one of his favorite sports, wrestling. After graduating high school, he studied Business and accounting at Mott Community College and chose a career in sales. Kevin was a man of integrity, strength and rich character. He loves his family and friends deeply and they love him even more. His life was centered around his faith in the Lord and savior Jesus Christ. His church base was Harris Temple Church of God in Christ under the jurisdiction of Superintendent T.R Harris. Kevin’s faith and spiritually was strong. No matter what, he kept a connection with the Lord. The Lord gives us all gifts and talents, Kevin’s was music. He knew as a young boy of his gifts. After meeting the legendary music artist, Stevie Wonder as a child he was even more inspired to pursue his passion as a musician and music artist. His instruments of choice were keyboards and bass guitar. In the music world he was known as “Balentino”, his mostly known song, “Call Me Anytime.” His passion for music was without falter. He worked tirelessly on his music and was in the process of completing an album before he was called home to the Lord. George Kevin Nealy Jr. married his beautiful bride Eve Burress, they raised their four amazing children whom he leaves his love and memories; James, Kenneth, Kaleb and Jazmyn Eve. The light of his life were his grandchildren Makaila Burress, Janelle Burress, James Burress Jr. and Brendon Burress; His three sisters who adore him, Shirelle (Kurt) Atkins, Sherrie Ruth Nealy, Crystal (Niguel) Williams; nephews and nieces who cherish him, nephews, Lafayette Wilson, Niguel S. Williams Jr. and Christopher B. Williams; nieces, Nyla (Jacquan ) Jones, Nia Ruth Atkins, nephew, Harrison G.W. Williams; great-nephews, Jace Averin and Legend Anthony Jones, great-niece, Layla Rose Alyssa Jones; great-nephews, Amir Legacy Atkins-Johnson, Kason Ray Wilson and Knight Ignatious Wilson; a host of family and friends. George is preceded by his wife Eve Nealy, parents George and Betty Nealy.

The family of Mr. George Kevin Nealy created this Life Tributes page to make it easy to share your memories.

Send flowers to the Nealy family.